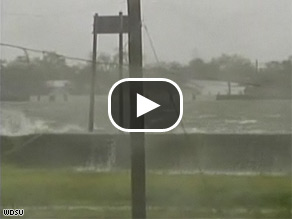 Watch as Gustav moves into the Gulf.

DETROIT (CNN) – Barack Obama cut short his Labor Day remarks at what was billed as a workers’ rally to focus on Gulf Coast residents in the path of Hurricane Gustav. He asked for a moment of silence and said “today is not a day for political speeches.”

“I have to tell you, that as we meet today, I have to change my plans a little bit,” said Obama. “Our neighbors and our fellow citizens in Louisiana and across the Gulf Coast are once again under siege from a terrible storm.”

“Although we are prayerful that this will not be the same kind of situation that we saw three years ago, today is not a day for political speeches. I hope you’ll forgive me – I hope you don’t mind,” he continued. “Today is a day for all of us to come together as Americans and send our thoughts and prayers to our brothers and sisters who are worrying at this very hour about their homes and their loved ones.”

Obama asked that his supporters give what they can to the Red Cross and other relief organizations. The campaign also sent out an e-mail and text message to their network soliciting donations.

Obama intertwined his planned pro-labor message with the day’s news, saying “that when we show solidarity with those folks in Louisiana and Mississippi and Texas and Alabama that we are expressing the true spirit of the labor movement. Because the idea behind the labor movement is that you don’t walk alone, you’re not by yourself…”

After a moment of silence, Obama asked that people remember the day’s spirit of unity going forward because “there are lot of people out there suffering silent storms.”

Obama will continue with day’s schedule, delivering speeches in Monroe, Michigan and Milwaukee, Wisconsin, but they will be shorter than usual and – like here in Detroit – focus on the Gulf Coast.

The remainder of the week, however, is up in the air. He will return home to Chicago Monday night to closely monitor the hurricane, the campaign says.