Lieberman, the 2000 Democratic VP nominee, met met with Palin to "share his experience as a VP candidate" the source said.

The two also talked policy and politics, the source said.

[cnn-photo-caption image= http://i2.cdn.turner.com/cnn/2008/images/09/03/art.tear.gi.jpg caption="Police may have used tear gas on RNC protesters."]ST. PAUL, Minnesota (CNN) - Police on Tuesday night used tear gas to prevent demonstrators from trying to climb over a security fence around the site of the Republican National Convention, a police spokesman said.

Police in riot gear and wearing gas masks told the crowd that if it did not disperse, they would use “a chemical agent” to break it up.

By the time the announcement was completed, shells contain tear gas were apparently being released

Tom Walsh, public information officer for the St. Paul Police Department, said that police took action when a “subset of the group” which had marched to the the Xcel Center made clear its intentions to breach the security fence.

Police also said they used “distraction devices” against the crowd.

More than 200 people were arrested when demonstrators clashed with police on Monday, police said, but no one was arrested on Tuesday.

ST. PAUL, Minnesota (CNN) – His popularity may be at an all-time low, but President Bush’s comments at the Republican National Convention were warmly received by many of the delegates.

Bush addressed the convention via satellite from the White House. Bush was originally scheduled to speak on the opening night of the convention. But he was forced to cancel as Hurricane Gustav bore down on the Gulf Coast. Quandahl said, “delegates would have preferred to have him here, but he did the right thing.”

Kathi Thompson, the wife of a retired Army officer from Hawaii, said whatever you think of President Bush’s administration, “He never wavered, and what you see is what you get.”

“He kept us safe, and he fought for the values we believe in,” she said. 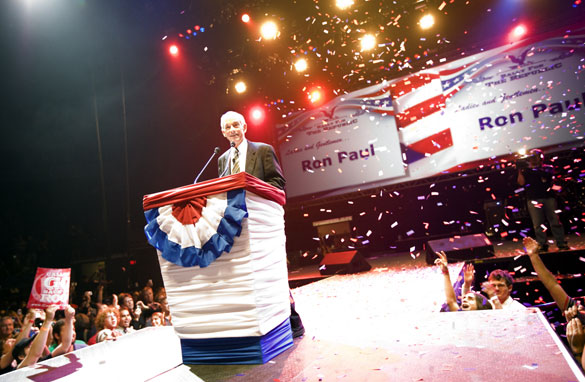 Gergen: A strong opening night for the GOP

[cnn-photo-caption image= http://i2.cdn.turner.com/cnn/2008/images/09/02/art.gergen.gi.jpg caption="Gergen says Republicans are likely happy with the first night of the RNC."]From a Republican perspective, this was a strong first night. Speaker after speaker gave testimony to the courage, patriotism and independence of John McCain - messages that will resonate with a good many voters across the land. In addition, they drew some stark contrasts between Barack Obama and McCain, the kind of contrasts that are legitimate at a political convention - even when you disagree with them.

But there were also some dispiriting aspects to the evening. It revealed once again just how deeply divided this country is and how much free-floating anger and hatred there is toward those seen on the other side. There is a whole lot of demonization going on that suggests just how difficult it will be for the next president to unite the country. Repubicans probably think that Democrats were worse than they were - and vice versa; personally, I cringed a little less at some of the Democratic rhetoric (though there was some that went over the line).

I also found it interesting how much the Repubicans are eager to fire up their supporters by reigniting the "culture wars". Abortion has very much injected into the campaign and once again the Republicans are finding it easy to beat up on the press - the "big shots" in the media, as they call them. Will it work? You tell me.

Will look forward to your thoughts.

None of the delegates appeared to be put out by the fact that a former Democrat was on stage. Lieberman, an independent senator from Connecticut, was the Democrat’s vice presidential nominee in 2000.

“It was a historic night for our country… It was magnificent.” Jean Peterson of Virginia said. “I think he did the country a great favor.”

“I was impressed by the personal courage he showed,” Jim Dicke, II, of New Bremen, Ohio, said.

Dicke said he believed Democrats who where waving between McCain and his Democratic rival, Sen. Barack Obama, would vote for McCain if they heard Lieberman’s speech.

“I think he was sincere, and so well and so much from the heart that people have to consider what he said.”

Schneider: Where’s the biggest issue of the year?

ST. PAUL (CNN) - What they’re asking for is a personal vote for John McCain - put aside policy, and the record of the Bush administration, and vote for the better leader.

Well, voters don’t do that.

They don’t put aside policy entirely. Most of all, they want to know what John McCain’s going to do to help fix the economy.

Personality does matter, but we’ve elected a lot of people who didn’t exactly have scintillating personalities: I give you Richard Nixon – twice – and Jimmy Carter. People vote for someone who can get the job done

What was interesting is, I didn’t hear much tearing down of Obama – less than you might expect, except from his fellow Democrat Joe Lieberman.

But a lot of raising John McCain to the status of a hero and saint. And no one denies that his story is remarkable, and requires respect and admiration. What people want to know is does he have the ability to solve the nation’s problems.

What’s missing in the whole evening, amid the chants of “USA!”, character, and honor, is any serious talk about the economy – issue number one on American minds. Sooner or later, someone at this convention has got to address it. The bottom line is, we’re still waiting for the biggest concern in the country to make an appearance. What are they going to do about the economy?

Crowley: Lieberman could get chilly response

Joe Lieberman just said: "Senator Obama is a gifted and eloquent young man who can do great things for our country in the years ahead. But eloquence is no substitute for a record."

Wonder which party Joe Lieberman will caucus with now? The Welcome Mat may not be out at the Democrats' luncheons.

Lieberman praises Palin, a woman with whom he disagrees on nearly every social issue in the political arena.

Schneider: Lieberman's days in Dem caucus drawing to a close

ST. PAUL (CNN) - Lieberman’s making an anti-partisan speech in front of a deeply partisan audience. Republicans see Lieberman as a way to attract Jewish voters. But polls indicate that Jews solidly prefer Obama, and that Lieberman’s popularity among Jewish voters has diminished. But it makes for an interesting tableau: odd to hear mention of global warming at a Republican convention.

He praised Clinton to a Republican audience – not generally safe thing to do. He’s trying to paint McCain as a more genuine unifier than Obama. The idea of John McCain as a maverick has become an object of heated partisan dispute. Maybe in 2000 it was undisputed. But not this year. And they’re beginning to raise questions about Sarah Palin as a maverick too. Did she really oppose the Bridge to Nowhere?

Lieberman’s days in the Senate Democratic caucus are numbered. The moment Democrats get enough votes to hold a majority without him, he’s gone.