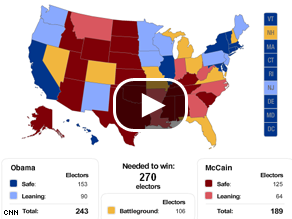 ST. PAUL, Minnesota (CNN) — Barack Obama may be inching closer to the magic number of 270 electoral votes necessary to win the White House, according to the most recent update to CNN’s electoral map.

“Iowa and Minnesota look good for Obama at this point in time. He is winning whites with no college degree in Iowa and splitting them evenly with John McCain in Minnesota," said CNN Polling Director Keating Holland. "But today's polls don't reflect any boost McCain might get from his convention, because nearly all the interviews were done before the festivities started in St. Paul. This could be Obama’s high-water mark in those states.”

Four years ago, George W. Bush carried Iowa by less than one percentage point; John Kerry won Minnesota by less than four points. The last Republican to carry Minnesota in a presidential election was Richard Nixon in 1972.

The CNN Electoral Map is based on analysis from the CNN Political Unit and takes into account a number of factors, including polling, state voting trends, ad spending patterns, candidate visits, and guidance from the campaigns, parties, and political strategists.