Ventura: 'Revolution's in the air' 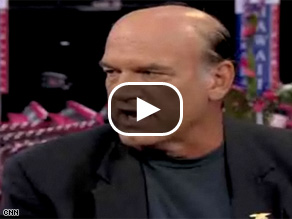 (CNN) – Rep. Ron Paul may have one more foot soldier in his "revolution" to protect the Constitution - former Minnesota Gov. Jesse Ventura.

Ventura on Tuesday spoke at a "counter convention" for the Texas congressmen and libertarian presidential candidate in St. Paul, Minnesota, the site of the Republican National Convention.

"There were about 14,000 to 15,000 people there," Ventura told CNN's John Roberts on American Morning Wednesday. "That bodes well for the people who believe our Constitution has been violated too long." The former marine and pro wrestler accused both Democrats and Republicans of violating the Constitution "whenever the need serves them to do so."

"Revolution's in the air," Ventura said, a reference his book "Don't Start the Revolution Without Me."

Although Paul's new political action committee is trying to attract like-minded candidates for Congress, Ventura told Roberts he plans to remain in the private sector and try to carry out his own "revolution" from there.