'U.S.A.' chant is code to drown out protesters

"There's word of a possible demonstration coming. If it does, the chant is 'USA, USA'," a floor whip was overheard telling members in the New York delegation.

Similar whispers were heard from the Alaska delegation clear across to the Louisiana delegation on the other side of the hall only moments before McCain began speaking.

On at least three occasions during the early part of his speech, members of the audience began chanting "U.S.A." in response to protesters, who were then escorted out of the hall.

In one such case, McCain weighed in telling the crowd not to be distracted “by the static…Americans want us to stop yelling at each other.”

Schneider: A big test for McCain 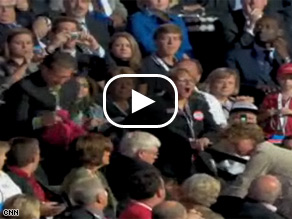 ST. PAUL, Minnesota (CNN) - As protestors in the audience continue to grab the crowd’s attention – and they unintentionally step on McCain’s speech with their chants - he recognizes that he really faces a serious problem. And he’s doing his best to short-circuit it.

The danger in incidents like this is that people will see him as a president that will divide the country. His initial response is the right on: the most important thing he can do is calm the situation, and the crowd – and keep calm himself.

Schneider: They who must not be named 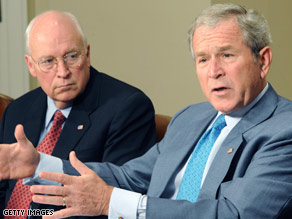 ST. PAUL, Minnesota (CNN) - The most important thing John McCain has to do tonight is demonstrate he knows the pain and anxiety Americans are going through right now, and has a plan to address that. Nobody doubts he’s a hero, they want to know what he’s going to do to fix the economy.

It was only a couple of years ago that John McCain was the Republican most admired among Democrats. A lot of Democrats continue to like him. He retains some residual popularity with Democrats, and particularly independents. But some of that glow has faded for them.

I wonder if the names George Bush or Dick Cheney will be uttered in this speech. 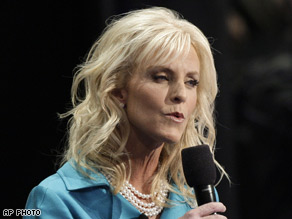 ST. PAUL, Minnesota (CNN) - Cindy McCain is delivering an oddly partisan speech -– it goes from humanitarianism to partisanship in the blink of an eye. It’s an unusually partisan and ideological speech from a prospective first lady.

Watch: Cindy McCain describes her husband as a source of 'strength' and 'inspiration'

She is making a positive case for her husband too: the idea is to reclaim his image as a maverick from 2000.

They do have a lovely and impressive family –- an undeniable political asset.

Police arrest about 200 after using tear gas to disperse crowd

[cnn-photo-caption image=http://i2.cdn.turner.com/cnn/2008/images/09/04/art.rnc.protest.jpg caption="Police were on guard Thursday at the Republican National Convention in St. Paul."]
ST. PAUL, Minnesota (CNN) - Police arrested about 200 people after using tear gas and percussion grenades Thursday night to disperse a crowd of protesters who had gathered near the State Capitol, about a mile from the site of the Republican National Convention.

Minnesota State Public Safety Commissioner Michael Campion said the arrests were made at an Interstate overpass that separated the marchers from the Xcel Center, where Sen. John McCain was preparing to address the GOP faithful.

As a line of police clad in riot gear and walking with bicycles approached a woman who refused to get out of their way, several sprayed her with a liquid. She covered her eyes with one hand and raised two fingers of the other hand in both hands in a vee.

A man standing nearby yelled, "I love you! Why are you doing this?" as the woman was shoved to the pavement.

Each time the protesters attempted to cross the highway that separated them from the convention center by about a mile, police attempted to stop them.

At one point, police on horses, motorcycles and bicycles followed marchers on a street-to-street chase that led through a shopping mall parking lot.

I don't think even Hillary Clinton gave such a long and substantial speech on behalf of her husband in 1992. We have entered a new era in politics, and Michelle and Cindy are a big part of it.

Attacking the wife is clearly a Republican thing - recall how Bush supporters smeared Cindy McCain during the 2000 South Carolina primary, then how they bitterly attacked Teresa Heinz Kerry in 2004. It's a classic double standard and a typical Republican philosophy: do as I say, not as I do. 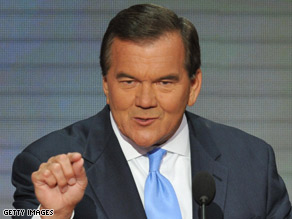 ST. PAUL, Minnesota (CNN) - John McCain and former Pennsylvania Governor and Homeland Security Chief Tom Ridge, who just spoke, share the Vietnam experience. It is an article of faith that if McCain could have picked a vice presidential candidate inside his comfort zone, Ridge would have been on the list (along with Lieberman and Lindsey Graham). We heard a good line from Ridge: the election is not about who will answer the 3 a.m. call, but who has answered the call all his life...

A cautionary note for McCain: Hillary Clinton played the experience card too.

John and I are so proud of them and so happy to have them here with us tonight.

Nothing has made me happier or more fulfilled in my life than being a mother.

But while John and I take great joy in having been able to spend time together this week as a family, our hearts go out to the thousands of families who have had to leave their homes once again due to devastating weather.

It is not only our natural instinct to rally to them, to lift them up with our prayers and come to their aid, it is also our duty to our country.

END_OF_DOCUMENT_TOKEN_TO_BE_REPLACED

[cnn-photo-caption image=http://i2.cdn.turner.com/cnn/2008/images/09/04/art.cindy.crowd.rnc.jpg caption="The crowd cheered for Cindy McCain and her family Thursday night."]
ST. PAUL (CNN) - The people closest to John McCain are beginning to appear on the podium as we approach prime time and the Arizona senator's acceptance speech. Sen. Lindsey Graham, who has been there since the beginning, turns the subject to Iraq and the surge. The Iraq war overwhelmingly unpopular in the country - but largely supported in this room of GOP activists.

Sex columnist: There's something about Republicans 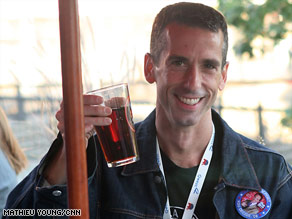 Planted in the "CNN Grill," Savage shares his thoughts on John McCain's running mate Sarah Palin, tells us what a sex columnist is doing at a political convention, and gives us his take on who's sexier: Democrats or Republicans.