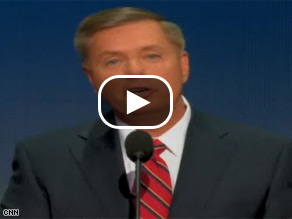 U.S. SEN. LINDSEY GRAHAM: By every measure, the surge of troops into Iraq has worked.

Sectarian violence and coalition casualties are at record lows.

15 of the 18 political benchmarks have been met.

The Iraqi's have a larger, more capable Army. Oil production is dramatically increasing.

This week, Anbar Province, once an Al Qaeda stronghold, was turned over to the Iraqis. And all American combat brigades who made up the surge have returned home.

We know the surge has worked. Our men and women in uniform know it has worked.

I promise you - above all others - Al Qaeda knows it has worked.

The only people who deny it are Barack Obama and his buddies at MoveOn.org.

Why won't they admit it?

Because Barack Obama's campaign is built around us losing in Iraq. Without John McCain's courageous leadership there would be no surge.

I was there with John McCain and Joe Lieberman every step of the way.

In our visits to Iraq, we saw the situation deteriorate.

The troops we met – the sergeants, captains, and colonels – had such respect and admiration for
Senator McCain they felt comfortable giving him something he knows a lot about - Straight Talk.

They said - Senator McCain, this ain't working. John heard their message and put their interests ahead of his own. He came back to Washington and told everyone, including Republicans, – we must change course.

For his honesty, some accused him of being disloyal. But John McCain's loyalties have always been to his country and to our men and women in uniform.

Not a political party.

Calling for more troops to be sent to Iraq was one of the most unpopular things John McCain could have done. Some said it was political suicide. But you know what?

It WAS THE RIGHT THING TO DO.

Because losing in Iraq would have been a nightmare for America. Al' Qaeda would have claimed victory over our nation. Sectarian violence would spread throughout the region. And Iran would fill the vacuum.

Last summer, we came within 2 votes of a congressionally mandated surrender. One Democrat broke with his party to support the surge.

It was John McCain's voice and credibility that stopped Congress from losing this war.

The Petraeus plan will be a model for generations to come, and our troops will be heroes for the ages.

Those who predicted failure, voted to cut off funding for our troops, and played politics with our national security will be footnotes in history.

There's no doubt about it, we are on the road to victory.

America is safer by winning in Iraq – A Muslim nation in the heart of the Arab world that rejects Al Qaeda.

A place in the Middle East where a woman can finally have a say about her children's future.

While Barack Obama expresses appreciation for our troops' service, he refuses to acknowledge their success.

They have worked too hard and sacrificed too much for a patronizing pat on the back.

Barack Obama went 2 and a half years between visits to Iraq and never once sat down with General Petraeus. If Barack Obama cannot appreciate that our troops are winning in Iraq, he should not be their Commander in Chief.

Not once was Barack Obama's eloquent voice ever raised in support of Victory in Iraq. Not once was it used to rally our troops in battle. Instead, he inspired those who supported retreat and would have accepted our defeat.

We should all be grateful that Barack Obama was unable to defeat the surge. The surge was a test for Barack Obama.

Our troops deserve a Commander in Chief who acknowledges their success. Has walked in their shoes. Speaks their language. Shares in their sufferings. And will lead them to victory in a war we cannot afford to lose.

That person is my dear friend John McCain.

John often says he would rather lose a campaign than lose a war. Here's the good news.

We are going to win this war.

And John McCain will be our next President of the United States.

But wait, it gets even better. Because John McCain has one of the toughest and most talented political reformers in America as his running mate.

Let's watch to learn more about the phenomenal Governor of Alaska, Sara Palin.