Heart condemns McCain-Palin use of 'Barracuda'

It's a shout-out to Sarah Palin. When she played basketball in high school, the soon-to-be Republican vice presidential nominee earned the nickname "Sarah barracuda" for her fierce competitiveness.

Some of her opponents revived the "Sarah barracuda" nickname after she became mayor of her hometown, Wasilla, in 1996, defeating a three-term incumbent.

UPDATE: Ann and Nancy Wilson of Heart said Thursday night that Universal Music Publishing and Sony BMG have sent a cease and desist notice to the McCain-Palin campaign over their use of 'Barracuda.'

"We have asked the Republican campaign publicly not to use our music. We
hope our wishes will be honored," the group said in a statement that said they "condemn" the use of the song at the Republican convention.

McCain: 'Fight with me'

[cnn-photo-caption image= http://i2.cdn.turner.com/cnn/2008/POLITICS/09/04/rnc.day/art.mccain.ap.jpg caption="Sen. McCain said Thursday that he's ready to lead the Republican ticket."]
ST. PAUL, Minnesota (CNN) - John McCain vowed Thursday to "shake up Washington" and said he's prepared to reach across the aisle to get the country "back on the road to prosperity and peace."

"We need to change the way government does almost everything," he told the Republican National Convention.

"Fight with me. Fight for what's right for our country. Fight for the ideals and character of a free people."

He said his running mate, Alaska Gov. Sarah Palin, is "just the right partner" to help lead the change.

"She's tackled tough problems like energy independence and corruption," he said. "She stands up for what's right and she doesn't let anyone tell her to sit down."

He added, "Let me offer an advance warning to the old, big-spending, do-nothing, me-first, country-second Washington crowd: Change is coming."

[cnn-photo-caption image= http://i2.cdn.turner.com/cnn/2008/POLITICS/09/05/schneider.speech/art.schneider.cnn.jpg caption="Schneider: McCain's tribute to Bush was risky."]
Bill Schneider has covered political conventions for more than 30 years and has covered them for CNN since the 1992 election.

ST. PAUL, Minnesota (CNN) - It's odd to present yourself as a maverick to the most partisan audience imaginable, as John McCain did Thursday night.

But the real audience wasn't sitting in the Xcel Center this evening to watch the Arizona senator accept the Republican Party's presidential nomination; it was the independents at home looking for a reason to vote for him.

It wasn't that long ago that McCain was the Republican most admired among Democrats. He retains some residual popularity with Democrats and particularly independents.

But some of that glow has faded.

But in a moment sure to be featured in campaign ads from now to November, he paid tribute to the sitting Republican president, George W. Bush. A risky move.

McCain: I work for you

[cnn-photo-caption image= http://i2.cdn.turner.com/cnn/2008/POLITICS/09/04/mccain.speech/art.mccain.cnn.jpg caption="Sen. McCain said Thursday that the 'do-nothing' Washington crowd is in for a change."]
ST. PAUL, Minnesota (CNN) - John McCain accepted the Republican nomination for president Thursday night "with gratitude, humility and confidence" as thousands of delegates chanted his name.

"Let there be no doubt, my friends, we're going to win this election," he said.

In a speech before a giant screen showing an American flag waving against a blue background, McCain promised to put the people first.

McCain portrayed himself as a fighter, saying he had fought corruption and big spenders, regardless of which party they came from.

But, he said, he had learned through a lifetime of fighting "it matters less that you can fight. What you fight for is the real test." 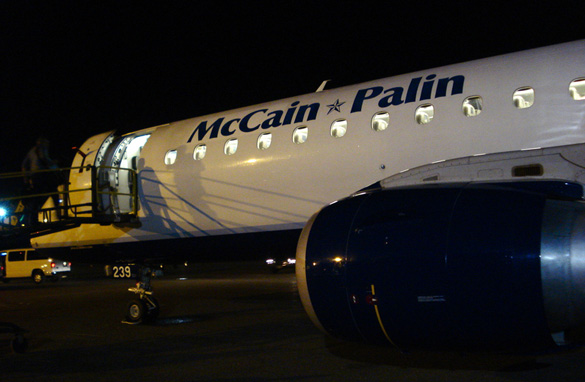 A first glimpse of the "McCain-Palin" charter jet destined for Milwaukee. The plane is the Jet Blue Embraer E190 that the McCain campaign used before the Straight Talk plane came onto the scene. Despite the prominent label, neither McCain nor Palin will travel on this newly-emblazoned plane on Thursday night, just reporters. The two candidates are seated on the main Straight Talk Air, also destined for Wisconsin (Photo credit: CNN/Hamby).

CNN: McCain: 'Fight with me'
John McCain vowed Thursday to "shake up Washington" and said he's prepared to reach across the aisle to get the country "back on the road to prosperity and peace."'

Washington Post: McCain, Obama Vie For 'Reformist' Mantle
This year, in the midst of a war, an economic downturn, an unpopular presidency and general dissatisfaction with the failure of the political system to deal with big problems, both McCain and his Democratic opponent, Sen. Barack Obama, are scrambling for the reformist mantle, hoping to appeal to the disaffected middle without alienating the activist party bases.

WSJ: Anomaly in Arms: Candidates' Children May Face Combat Duty
Regardless of who wins this November's election, the U.S. is about to have its "Prince Harry" moment.

NY Times: House Chairman Failed to Report $75,000 in Income
Representative Charles B. Rangel has earned more than $75,000 in rental income from a villa he has owned in the Dominican Republic since 1988, but never reported it on his federal or state tax returns, according to a lawyer for the congressman and documents from the resort.

CNN: About last night...
See what CNN’s political experts and analysts had to say about McCain’s speech and the final night of the Republican National Convention.

CNN: Cindy McCain: John McCain speaks truth, at any cost
Cindy McCain praised her husband, Republican presidential nominee John McCain, as "someone of unusual strength and character" in a speech to the Republican National Convention on Thursday.

CNN: Graham: 'On the road to victory' in Iraq
Sen. Lindsey Graham says 'America is safer by winning in Iraq' thanks to Sen. John McCain.

END_OF_DOCUMENT_TOKEN_TO_BE_REPLACED

* Sen. John McCain and Gov. Sarah Palin attend a meet and greet in Cedarburg, WI and then head to a rally in Sterling Heights, MI.

* Sen. Joe Biden and his wife Jill hold a discussion in Langhorne, PA.