Maher sounds off on Palin 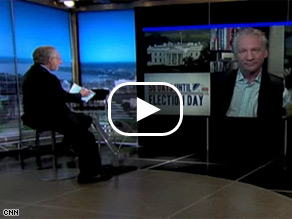 Bill Maher has harsh words about Alaska Gov. Sarah Palin in this interview from the Situation Room.

(CNN) - Watch comedian and political commentator Bill Maher as he discusses the presidential race with The Situation Room's Wolf Blitzer.

Maher is the host of HBO's "Real Time with Bill Maher."  CNN and HBO are both part of the Time Warner family of companies.