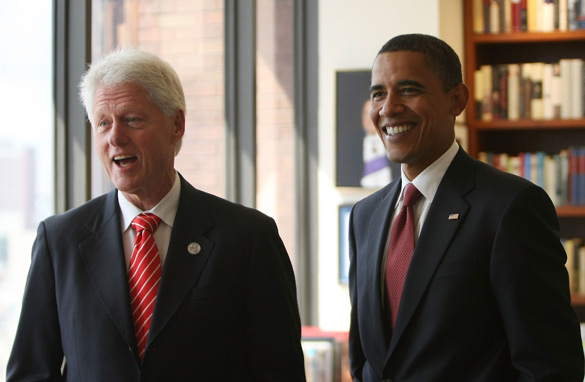 The two men chatted with reporters in a photo-op at Clinton's Harlem office before sitting down for a private lunch.

Clinton is scheduled to campaign for Obama in Florida later this month. According to aides, the former president will appear at a mix of fundraisers and campaign events on behalf of the Democratic ticket throughout the fall.

Clinton said he’d "agreed to do a substantial number of things, whatever I'm asked to do.”

Obama smiled at Clinton's prediction that he would take the White House: "There you go, you can take it from the President of the United States. He knows a little something about politics."

The image of the two men meeting comes as a relief to many Democrats who have been hoping to put to rest the "Clinton-Obama rift" storyline. Both Clintons praised Obama in their convention speeches, but agreed a face-to-face meeting with the president was a necessary step in putting the contentious primary season behind both camps.

The two men were said to be dining on a mix of sandwiches, salads and pizza from the lunch chain Cosi.