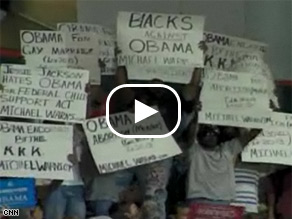 Protesters holding posters saying Sen. Barack Obama was endorsed by the KKK are escorted from his speech

(CNN) - Barack Obama's campaign rally in Coral Gables, Florida Friday was interrupted by a group of about 10 African-American protesters holding signs that called themselves, "Blacks Against Obama."

The signs said Obama was for gay marriage and abortion, and said his candidacy was "endorsed by the KKK." Another sign said, "Jesse Jackson hates Obama."

Obama originally said the protesters could stay inside the event, but they were escorted out when they would not stop shouting.