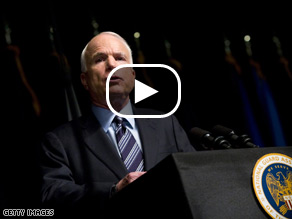 Watch: Sen. John McCain is calling for an oversight board to keep financial firms in check.

(CNN) - John McCain is expected to say Monday morning he is not comfortable with Treasury Secretary Henry Paulson's proposal that appears to give the administration unprecedented power to oversee the nearly $1 trillion federal bailout of the nation's debt-ridden investment banks.

Instead, McCain will call for a bipartisan oversight board that could include financial experts such as former Massachusetts Gov. Mitt Romney, Berkshire-Hathaway CEO Warren Buffet and New York City Mayor Michael Bloomberg.

"We will not solve a problem caused by poor oversight with a plan that has no oversight," McCain is expected to say.

"I believe we need a high level oversight board to impose real criteria for who gets help and who does not; and to ensure that we have a careful steward of the taxpayer’s dollars," McCain will say according to his campaign. "It should be bipartisan and have qualified citizens who have no agenda but the protection of taxpayers and the financial markets."

Related: McCain, Obama to weigh in on proposed rescue plan

Meanwhile, McCain told NBC's Today Show on Monday that he thinks the country is in "the most serious crisis since World War II." Those comments appear at odds with the Arizona senator's initial reaction to the collapse of investment bank Lehman Brothers one week ago when he declared the fundamentals of the economy remained "strong."

Soon after he made those remarks, McCain sought to clarify his remarks by noting that he was referring to the “American workers.”

“They are the fundamentals (of) our economy and the strength of it and the reason why we will rebound,” McCain said in an interview last week on CNN’s American Morning.