Rep. Frank: Paulson and Bernanke shouldn't be only ones in charge 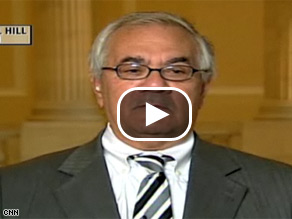 Watch: Rep. Barney Frank says Paulson and Bernanke shouldn't be the only ones in charge.

“The notion that while they are getting this help from the federal government we can’t tell them not to have golden parachutes, not to pay millions to some of the very people who made bad decisions as a retirement gift, is unacceptable to us,” Frank told CNN’s John Roberts.

Frank said he admired Secretary Henry Paulson and Chairman Ben Bernanke as capable men, but said “no one two or six individuals ought to have this power.”