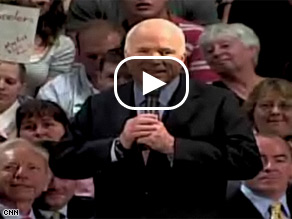 (CNN) - McCain senior adviser Steve Schmidt accused the New York Times Monday of being “in the tank” for Barack Obama’s presidential bid, and charged the Democrat’s team with a “campaign of intimidation” directed at his critics.

“Whatever by the New York Times once was, it is today not by any standard a journalistic organization,” said Schmidt, on a conference call with reporters. “It is a pro-Obama advocacy organization that every day attacks Senator McCain, attacks Governor Palin and excuses Senator Obama.

“There is no level of outrage directed at his deceptive ads. There is no vetting...This is an organization that is completely, totally 150 percent in the tank for the Democratic candidate,” said Schmidt, saying later: “We would hope in the last 43 days of this campaign… that there is a restoration to some degree of a level of symmetry in coverage.”

The former Bush adviser has been an increasingly vocal media critic. Earlier this month, he accused journalists of being on a “mission to destroy” Sarah Palin, and called a Times investigative report on the vetting process that preceded her selection as McCain’s running mate a “work of fiction.”

Schmidt also told reporters on the call, “There is no question that there is a fierce campaign of intimidation directed at any critic of Obama’s” by his campaign.

But McCain aides backed away from claims last week that Obama had pressured Senator Hillary Clinton into backing out of an appearance at a rally where Governor Sarah Palin would be in attendance, and of pushing organizers to disinvite the Republican VP nominee, with campaign manager Rick Davis saying instead that the incident demonstrated a “failure of leadership” by the Democratic nominee.