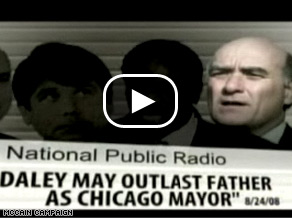 (CNN) - Former Commerce Secretary Bill Daley, the unwilling co-star of a Monday attack ad from John McCain's campaign, told CNN he was "shocked" by the spot: "I always had a good relationship with [McCain] - or I thought I did."

Daley accused McCain of hypocrisy for attacking Obama on lobbyists: "When I was at [telecom company] SBC, I had to hire [McCain campaign manager] Rick Davis to see John McCain," he said. "He wouldn't see anyone unless you hired one of his lobbyist friends. Telecom was his and Rick Davis was his telecom lobbyist. That was in '02, '03, '04."

He said that McCain voted for his confirmation as Commerce Secretary, and pointed to the Arizona senator's public praise of his work in the Clinton cabinet.

(For instance, during a May 1998 confirmation hearing for another Commerce official, McCain said that since Daley's arrival, "relations for the department have been improving. Mr. Daley's frank, honest style and hard work have been reaping rewards." And in 2000, he pointed to Daley's "valiant effort to clean up the Commerce Department's reputation as a dumping ground for the politically connected.")

Said Daley Monday: "I think [McCain] has totally sold his soul to get elected. The things he found important in 2000 he isn't doing now."