Cafferty: What will you look for at the Presidential debates?

With the polls tightening, the stakes for the upcoming presidential debates are getting higher. The first of three debates is set for this Friday in Mississippi. Despite all that is already known about John McCain and Barack Obama, presidential debates are famous for sometimes producing a moment that will change the outcome of the election. The pressure is definitely on.

The Wall Street Journal reports that Obama's advisers are looking for ways for Obama to provoke McCain's anger or to show that he's out of touch with the average American. McCain's advisers are coaching McCain to pounce on certain phrases Obama may say like "as I’ve said before..." A McCain aid told The Journal Obama uses that phrase on occasions where he's actually changed his mind.

The first debate was supposed to cover domestic issues, but both campaigns agreed to change it to foreign policy.

[cnn-photo-caption image= http://i2.cdn.turner.com/cnn/2008/images/09/23/art.cnnlive5.cnn.jpg caption="Watch Obama's event on CNN.com/live."](CNN) - Barack Obama is laying out his views of the federal bailout proposal at an event in Florida this hour.

Watch the speech on CNN.com/live

END_OF_DOCUMENT_TOKEN_TO_BE_REPLACED

Greene: A place where the campaign has not yet begun 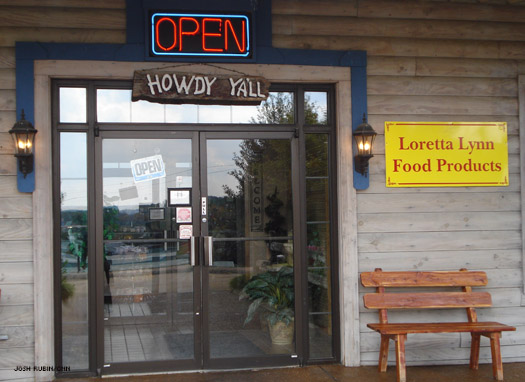 HURRICANE MILLS, Tennessee (CNN)– As Friday night’s first presidential debate approaches, with some television-industry experts predicting that the 90 minutes will garner Super Bowl-level ratings, it is instructive, and more than a little humbling, to step for a moment into the place where we paused for a bite to eat on our way to Mississippi.

This election year is often said to have captured the public’s imagination to a degree seldom seen in U.S. history. The nation is reputed to be all but addicted to the campaign and everything about it.

The country-style restaurant to which we pulled up, one of whose owners is singer Loretta Lynn (she lives nearby), is at the top of a steep hill off the main road. We walked in– Election Express driver Dale Fountain, producer Josh Rubin, engineer Jordan Placie and myself– were seated, and, as has become a habit in recent days, I immediately got back up and started to ask the people who worked there what their customers have been saying about the campaign.

I waited for her to expand on that. She did not.

“People don’t express an opinion on the candidates?” I asked.

“No,” she said, just as pleasantly.

In front of her, next to the cash register where the mints should be, were three little baskets of guitar picks for sale: two sets of Elvis Presley picks (one black and one red), one set of Loretta Lynn picks.

“Everyone in the country is talking about the election,” I said.

“Not in here, they’re not,” she said. “I maybe hear someone mention it in passing once a week.”

“What do your customers talk about?" I said.

“I guess gas,” she said. “The price. How it went up 80 cents at the Pilot truck stop at the bottom of the hill before Hurricane Ike even hit."

In the dining room itself, a young waitress, Lacey Landers, said that her customers “talk about a little bit of everything. Hunting, the Pinks drag races. . . ."

(The Pinks drag races, for the uninitiated, are a television series on the Speed Channel in which contestants race their cars against each other and the winner departs with the loser’s car. The series‘ slogan is: “Lose the race– lose your ride.”)

“We had one customer come in after he was in a Pinks race and on his trailer outside he had a '69 Camaro and a '76 Trans Am,“ she said. Evidently, he had prevailed.

Dale Fountain asked her: “Do any of your customers talk about politics?"

“Maybe it has something to do with the politicians," she said.

Another waitress, Tanya McIllwain, walked by, and I asked her if she was hearing talk of the election at her tables.

“I’d have to say never,” she said. “It’s all over television, you know. You’d think people would be talking about it. But I don’t hear it.”

We said thank you, left to continue our journey to the debate in Oxford, Mississippi, and, on the way down the hill with Dale at the wheel, decided unanimously that we would put the clientele at Loretta Lynn’s Country Kitchen in the “undecided” category, at least for now.

[cnn-photo-caption image= http://i2.cdn.turner.com/cnn/2008/images/09/23/art.ap.biden.917.jpg caption="Sen. Biden took aim at McCain on overseas tax loopholes."]
WOODBRIDGE, Virginia (CNN) – Joe Biden Monday followed up on an ad released that morning by his campaign that criticized John McCain for protecting insurance companies that evade taxes by sending their earnings offshore to Bermuda, accusing the Republican nominee of saying one thing in public and another in private, remarking “maybe he should be asking those companies to put America first.”

“This continues something that has been a disturbing trend lately with John McCain,” said Biden. “Claiming the mantle of reform in public, but promising business as usual in private.”

Biden argued that domestic insurance companies are dodging $4-7 billion in taxes by claiming a headquarters in Bermuda. He pointed to a June article in the island’s Royal Gazette that says McCain “spent three days on the Island last year meeting business and political leaders and claiming he understood the concerns of the insurance sector about draft legislation proposing a clampdown on US business operations in tax havens.”

“On the floor of the United States Senate, John spoke out against these offshore tax breaks not long ago,” said Biden .“Then, while he was in Bermuda, according to the Bermuda Royal Gazette, the newspaper, he started singing a very, very different tune.”

Echoing the ad, Biden charged that McCain had taken $50,000 in campaign contributions from insurance company executives who profit from the tax haven.

END_OF_DOCUMENT_TOKEN_TO_BE_REPLACED

The ad, which Biden called 'terrible' Monday in an off-the-cuff comment to CBS News, also appeared to only air in the Washington, DC area, though it was heavily reported in blogs and news reports.

The 30-second spot was released by the campaign 10 days ago and sought to portray McCain as out-of-touch with most Americans.

Watch: Obama ad paints McCain as out of touch

“1982. John McCain goes to Washington,” says the announcer. “Things have changed in the last 26 years. But McCain hasn’t. He admits he still doesn’t know how to use a computer, can’t send an e-mail. Still doesn’t understand the economy."

But Newsweek reported last week that McCain and wife Cindy own 13 cars, including three foreign automobiles: a Lexus, a Volkswagen and a Honda. McCain also told the New York Times last year that he bought his daughter, Meghan, a Toyota Prius. He later denied the purchase and said Meghan bought the car herself.

This is the latest in a campaign by the Obama team to portray McCain as wealthy and out of touch with ordinary Americans. Last month, Democrats jumped when McCain said he wasn’t sure how many homes he owns.

The ad will start running in Michigan, the auto-manufacturing capital of the United States, on Wednesday.

END_OF_DOCUMENT_TOKEN_TO_BE_REPLACED

Fact Check: Does Obama want to ban guns and rifles?

In an ad titled "Hunter," aired Monday, September 22, the National Rifle Association asserts that Democratic presidential nominee Sen. Barack Obama has voted to ban common ammunition and supports banning shotguns and rifles used by hunters. "Now I learn that Barack Obama supports a huge new tax on my guns and ammo," the narrator of the ad says. "If you can believe it, he also supports a ban on the shotguns and rifles most of us use for hunting."

Get the facts after the jump!

END_OF_DOCUMENT_TOKEN_TO_BE_REPLACED

Greene: A message to the candidates: "This is not a game"

CAMBRIDGE, Ohio (CNN) - There are moments - sometimes fleeting and quiet - that make you stop and consider anew just how much is at stake on that day in November when a new president will be elected.

And some of those moments carry not even a sliver of partisanship. Not a hint of anger or acrimony.

We had pulled into Cambridge, Ohio, for lunch. It was a sunny afternoon in the town of 13,000, with a farmers' market on the courthouse lawn across from the Advantage Bank building. The setting felt like a vintage postcard; the local newspaper, the Jeffersonian, featured stories about a "Bark in the Park" event for the dogs of Guernsey County, and an announcement of the cast for the Deersville Community Players' fall theatrical production, "A Wing and a Prayer."

Some staff members of the bank came outside, and we started talking about the campaign, and one of them - Paula Smith, 43, a loan processor - said:

"I hope the candidates ask themselves sometimes if they're being completely honest with us about everything they put on the table."

I asked her what she meant.

"All this bashing of each other - I hope when they lay their heads down at night, they think about that. Because there are a lot of us out here who are depending on whoever wins, and I hope that in the middle of all the things they're saying, they pause once in a while to think about that." 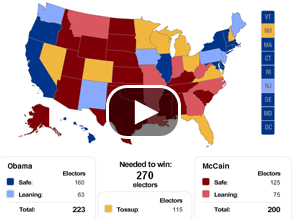 (CNN) - A series of new CNN poll of polls out of key battleground states Tuesday suggests the race for the White House remains extremely tight with exactly six weeks remaining until Election Day.

The poll of polls do not have a sampling error while the new Quinnipiac poll carries a margin of error of plus or minus 2.6 percentage points.

Full poll results after the jump: