“I expect there to be a debate tomorrow night and I look forward to it," he said.

John McCain has suggested pushing back the debate if an agreement on the economic bailout has not been reached by Friday morning. Barack Obama has said the debate should occur regardless of whether the bill is passed by that time.

Greene: Something even bigger than a presidential debate

OXFORD, Mississippi– Tomorrow night’s presidential debate at the University of Mississippi, if it happens, is supposed to be a wonderful and memorable moment for the students here– but let’s keep things in perspective.

We heard very loud noises from outside the bus where we’re parked on the Ole Miss campus. “Very loud” is an understatement.

I can assure you that this was not their way of welcoming us to the campus. As a matter of fact, they seemed a little annoyed– politely annoyed, if there is such a thing, but annoyed nonetheless.

“It’s kind of an inconvenience, having to practice out here in this parking lot,” said Chris Patterson, 18, a bass drum player who is a freshman. “We can‘t get in the Band Hall.“

Greene: Something even bigger than a presidential debate 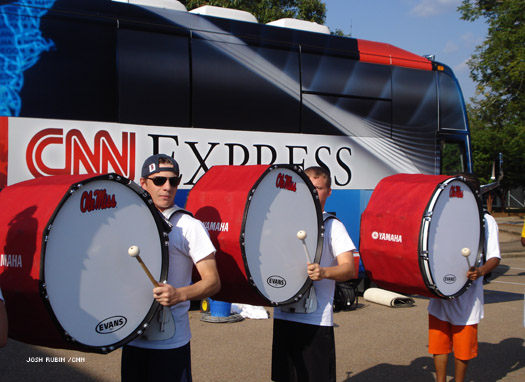 Listen to Chris Patterson and Pride of the South drum section rehearse.

OXFORD, Mississippi– Tomorrow night’s presidential debate at the University of Mississippi, if it happens, is supposed to be a wonderful and memorable moment for the students here– but let’s keep things in perspective.

We heard very loud noises from outside the bus where we’re parked on the Ole Miss campus. “Very loud” is an understatement.

I can assure you that this was not their way of welcoming us to the campus. As a matter of fact, they seemed a little annoyed– politely annoyed, if there is such a thing, but annoyed nonetheless.

“It’s kind of an inconvenience, having to practice out here in this parking lot,” said Chris Patterson, 18, a bass drum player who is a freshman. “We can‘t get in the Band Hall.“

He said that the reason he and his more than 200 fellow members of the University of Mississippi Marching Band, which is formally and famously referred to as the Pride of the South, could not get into their building was that it has been converted, this week, into a workspace for reporters and television producers who are covering the debate.

I asked him if he was impressed that the first debate had been scheduled at Ole Miss, out of all the possible sites in the country.

He said something, which there was no way in the world I could hear. These people were really slamming their instruments by this point.

So we walked closer to the bus, which served as something of a buffer, and he said, referring to the debate: “It’s a good thing.”

But the fact is, when you’re a member of the Pride of the South, accustomed to performing in front of more than 60,000 people in Vaught-Hemingway Stadium every football Saturday, a political debate, no matter how historic, is not what you’re going to most fondly recall about your years on campus.

Rebekah Tettleton, 20, a sophomore cymbals player, answered courteously when I asked her what she thought of the debate being held here:

She said she that if the debate is held as planned, she would watch it on television tomorrow night if she could, but she knew she was scheduled to work a shift in the campus bookstore.

At least I think she said that. I asked her how she could keep her sanity with all this noise around her all the time.

She pointed to the side of her head and said: “Earplugs.”
[cnn-photo-caption image= http://i2.cdn.turner.com/cnn/2008/images/09/25/band2.jpg caption="Julius Booth"]
Julius Booth, 19, a sophomore bass drum player, was not playing a drum in the parking lot. He was, in fact, not playing anything.

I asked him why.

He said that he would have a new one by the time of the next home game. He is an African-American member if the University of Mississippi marching band, something that at one time in this state would have seemed beyond the realm of possibility. He said that the thrilling feeling of marching into that stadium was difficult to adequately describe: “Oh, man, the crowds, the sound from the stands. . .they go crazy. What it does to me when I hear all those people cheering. . . .”

It has thrown their routine off this week, having to move out of the Band Hall and cut down their number of practices, he said. But he, and they, understand the reason: a presidential debate is a very important thing.

As important to these young men and women as being full-fledged members of the Pride of the South?

(CNN) - Since John McCain announced he would be suspending his campaign pending the passage of a bailout bill, his staffers have said they are in the process of pulling down television ads. Rival Barack Obama’s campaign is taking the opposite approach, launching a one-minute spot featuring the Democratic nominee talking about his economic plan. The campaign says the spot will air in “key targeted states” starting Thursday.

END_OF_DOCUMENT_TOKEN_TO_BE_REPLACED

Speaking to a small pool of reporters following a visit to Ground Zero in lower Manhattan, Palin made a statement and then answered four questions, addressing the war on terror, the re-election bids of Alaska Sen. Ted Stevens and Rep. Don Young, and the bailout legislation currently in front of Congress.

Check out the transcript after the jump

END_OF_DOCUMENT_TOKEN_TO_BE_REPLACED

[cnn-photo-caption image= http://i2.cdn.turner.com/cnn/2008/images/09/25/art.ap.biden.9.18.jpg caption="Sen. Joe Biden said Barack Obama's call to McCain showed leadership."]
GREENSBURG, Pennsylvania (CNN) – As Barack Obama and John McCain make their way to Washington Thursday to meet with President George Bush and discuss the bailout package, Joe Biden heaped praise on the Democratic nominee for reaching out to his Republican counterpart on Wednesday, and continued to criticize the Arizona senator for his “lurching” position on the economy.

“In the midst of all this political blather that’s going on, all the negative ads being heaped upon [Obama], what did he do?” asked Biden. “He reached out, he picked up the phone and he called John McCain, and he said we should put aside the politics of the day and we should see if can agree jointly on the basic elements of what needs to be in this package.

The Delaware senator took aim at McCain for saying last Monday that “the fundamentals of the economy are strong,” but since then arguing that the economy is in dire straits.

“You can’t be president of the United States of America and lurch so rapidly from one fundamental position to another,” said Biden. “See sunlight and then seeing nothing but darkness all in a matter of two hours. Ladies and gentlemen, you can’t gain the confidence of the nation and you can’t gain the confidence of the world when in fact you are not rooted and know exactly what you think.”

END_OF_DOCUMENT_TOKEN_TO_BE_REPLACED

"This doesn't smell right," Letterman said during a routine that only half appeared to be a joke. "This is not the way a tested hero behaves. Somebody's putting something in his Metamucil."

Shortly before he was slated to be on Letterman's show Wednesday, McCain announced he was suspending his presidential campaign to head back Washington to help ensure Congress passes a version of the economic bailout bill.

But Letterman didn't appear to buy the Arizona senator's explanation, and after praising McCain's record as a prisoner of war in Vietnam, said, "This is not the John McCain I know, by God."

"It makes me believe something is going haywire with the campaign," he said. "Something's gotten to him."

"Here's what you do if you are running a campaign in the middle of an economic crisis and it’s about to crater," Letterman continued. "You go back to Washington, you handle what you need to handle. Don't suspend your campaign. You let your campaign go on shouldered by your vice presidential nominee...or is that really a good thing to do? See what I am saying?"

Speaking on NBC's Today Show Thursday morning, McCain spokeswoman Nicole Wallace said, "We deeply regret offending Mr. Letterman, but our candidate's priority at this moment is to focus on this crisis," she said.

HAPPENING NOW: Biden on the stump in Pennsylvania

[cnn-photo-caption image= http://i2.cdn.turner.com/cnn/2008/images/09/25/art.debate2.gi.jpg caption="Biden and Palin are set to debate October 2."](CNN) - McCain supporter Sen. Lindsey Graham tells CNN the McCain campaign is proposing to the Presidential Debate Commission and the Obama camp that if there's no bailout deal by Friday, the first presidential debate should take the place of the VP debate, currently scheduled for next Thursday, October 2 in St. Louis.

In this scenario, the vice presidential debate between Joe Biden and Sarah Palin would be rescheduled for a date yet to be determined, and take place in Oxford, Mississippi, currently slated to be the site of the first presidential faceoff this Friday.

Graham says the McCain camp is well aware of the position of the Obama campaign and the debate commission that the debate should go on as planned - but both he and another senior McCain adviser insist the Republican nominee will not go to the debate Friday if there's no deal on the bailout.

"Let me be clear: it’s outrageous that we find ourselves in a position where taxpayers must bear the burden for the greed and irresponsibility of Wall Street and Washington," he said. "But we also know that a failure to act would have grave consequences for the jobs, and savings, and retirement of the American people."

"Over the last few days, I’ve been in close contact with Secretary Paulson and leaders in Congress. I’ve also had the opportunity to speak directly to the American people about what we need to do moving forward. I’ve laid out several clear principles that I believe must be a part of our response to this crisis," he added.

Watch the event after CNN.com/live

Read his prepared remarks after the jump!