Fact Check: Did Obama say the Iraq troop 'surge' could not work? 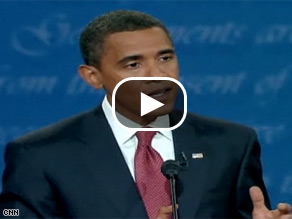 At a debate Friday, Sept. 26, in Oxford, Mississippi, Republican presidential nominee Sen. John McCain attacked Democratic rival Sen. Barack Obama's stance on the "surge" of troops in Iraq. "Senator Obama said the surge could not work, said it would increase sectarian violence, said it was doomed to failure," McCain said. "Recently on a television program, he said it exceeded our wildest expectations."

In a January 10, 2007, speech, President Bush announced plans to increase the number of troops in Iraq by about 20,000 in an effort to quell violence throughout the country and especially in Baghdad. By spring 2008, as the number of deaths and other violence in Iraq began to drop, Bush and other supporters - including McCain - were hailing the "surge" as a success and giving it much of the credit for the improvements.

In Congress, Obama was one of many lawmakers who spoke against the plan. "I am not persuaded that 20,000 additional troops in Iraq is going to solve the sectarian violence there. In fact, I think it will do the reverse," he said in a response to Bush's speech. On at least some occasions, Obama - who has campaigned on a promise to end the war in Iraq - said he wasn't questioning the ability of U.S. troops, but the long-term political impact the surge would have.

"Even those who support the escalation have acknowledged that 20,000, 30,000, even 40,000 more troops placed temporarily in places like Baghdad are not going to make a long-term difference," he said in a March 19, 2007, interview on CNN's "Larry King Live."

In a September 4 interview this year, Obama said the military surge "succeeded beyond our wildest dreams," but that goals laid out by Bush, including turning over control of all Iraqi provinces to that nation's security forces, have not been achieved. "There's an underlying problem with what we've done," Obama said. "We have reduced the violence, but the Iraqis still haven't taken responsibility."

The Verdict: True, but incomplete. While acknowledging the surge's military success, Obama says the political goals it was meant to secure have not been met.