Obama 'optimistic' a deal can be reached 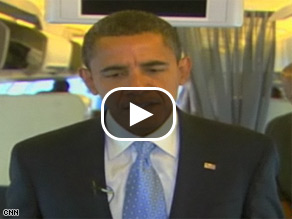 Watch: Sen. Barack Obama says he is optimistic a deal can be reached on the financial bailout.

(CNN)— Sen. Barack Obama said Friday he is “optimistic” a deal can be reached on the financial bailout and the best way forward is to explain his vision to the American people at the debate in Mississippi.

“I think that there is real progress being made this morning and last night,” Obama told reporters onboard his press plane en route to the debate.

The Illinois senator said he had several conversations with Treasury Secretary Henry Paulson, House Speaker Nancy Pelosi, Senate Majority Leader Harry Reid, Sen. Chris Dodd, and other Republicans involved that reassured him progress will be made.

McCain also announced Friday he will head to the debate, feeling sufficient progress on the bill had been made.

“At this point, my strong sense is that the best thing that I can do, rather than to inject presidential politics into some delicate negotiations, is to go down to Mississippi and explain to the American people what is going on and my vision for leading the country over the next four years,” Obama also said.

Asked if Thursday’s meeting at the White House was a mistake, Obama admitted he wasn’t sure “it was as productive as it could have been,” adding the best move at this point is “to just move forward.”

Both John McCain and Barack Obama are expected back in Washington D.C. after Friday night’s debate to finalize plans for an economic package.