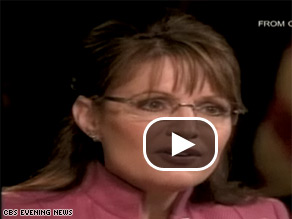 Watch: In her third TV interview, Gov. Sarah Palin raises eyebrows with some of her comments.

(CNN) - The United States should not second guess actions Israel takes in the name of security, Sarah Palin seemed to suggest in a Thursday interview.

The Republican VP nominee recently said that she would never "second guess Israel if that country decided to attack Iran." Speaking with Katie Couric of CBS News, she stood by that quote.

“We shouldn't second guess Israel's security efforts because we cannot ever afford to send a message that we would allow a second Holocaust, for one,” she said. “Israel has got to have the opportunity and the ability to protect itself. They are our closest ally in the Mideast. We need them. They need us. And we shouldn't second guess their efforts.”

The Alaska governor said the United States should be free to relay its rights our concerns, but “we don't have to second-guess what their efforts would be if they believe ... that it is in their country and their allies, including us, all of our best interests to fight against a regime, especially Iran, who would seek to wipe them off the face of the earth,” said Palin. “It is obvious to me who the good guys are in this one and who the bad guys are.”