Clinton told NBC's Tom Brokaw that it was only earlier this month in Harlem that he and Obama had their "first conversation." He said he had spoken with Obama before, but only in passing.

Clinton then explained what he meant in characterizing McCain as a "great man."

"I think his greatness is that he keeps trying to come back to service without ever asking people to cut him any slack or feel sorry for him or any of that stuff because he was a POW," Clinton said of the Republican presidential nominee.

Clinton, who successfully ran his own 1992 presidential campaign on the now commonly used phrase "it's the economy, stupid," said that he believed the current economic crisis "left [Obama] in a position of leadership that he's now in."

Clinton said he thought Obama "saw and imagined" how the economic situation could develop.

"And I think that the rest of us should admire that. That's a big part of leadership, being able to sense, as well as see the future," he said.

Clinton said he and Obama are developing a "really good relationship," and the Democratic nominee has the potential for greatness. Explaining, he said Obama has many personal accomplishments, but none that exemplify his greatness to the country.

"When he becomes president, he'll be doing things for the American people and for the world and he is-and the greatness will then become apparent because of the good he'll do...That's what I very much believe is going to happen."

Some have questioned Bill Clinton's support for Obama following the protracted primary battle between the Illinois senator and Hillary Clinton. The former president praised Obama during his speech at the Democratic National Convention and declared Obama "ready to be president of the United States," as both sides tried to bring an end to the "Clinton-Obama rift" storyline.

Clinton himself was among the most outspoken critics of Obama's readiness during the primary season.

The reason it has taken him so long to hit the trail for Obama was the need for him to return to work on his foundation after the long primary season, Clinton explained Sunday.

He is expected to campaign for Obama in Florida, Ohio, northeast Pennsylvania, and Nevada after the Jewish holidays.

"I'm going to do my very best to do every single thing he asks me to do," Clinton said.

WILMINGTON, Delaware (CNN) – As Joe Biden settles into debate prep mode this week ahead of Thursday night’s debate, campaign aides are actively playing up Sarah Palin’s debating skills. Biden’s spokesman called Palin “a leviathan of forensics,” a classic example of the campaign tactic of raising the expectations of an opponent and lowering your own.

“As you saw at the convention she can be very good. So, I think it would be foolish to assume that this isn’t going to be a really challenging debate. We're preparing for that, on that assumption.”

Taking it one step farther, Biden spokesman David Wade later added, “he's going in here to debate a leviathan of forensics, who has debated five times and she's undefeated.”

Biden has a difficult task on his hands – not coming across as condescending with his decades of experience and not adopting a tone that could appear as though he’s treating Palin differently because she’s a woman.

“I think Governor Palin is a skilled politician,” said Axelrod. “She got elected in a very tough political arena against tough opponents and we're going to treat her with the respect that she deserves. And I think that she would expect that, I think voters should expect that.”

Axelrod argued that at the end of the day, the choice voters make is between the candidates at the top of the ticket and not the vice presidential candidates. However, he said VP nominees have a harder time preparing because they need to not only defend their own positions but those of their running mate, as well as knowing where both candidates on the opposing ticket stand.

END_OF_DOCUMENT_TOKEN_TO_BE_REPLACED

Palin in 'debate camp' until Thursday

Sarah Palin will be at John McCain's rustic creek side home outside Sedona for what a top aide calls "debate camp."

The aide, who's part of the team prepping Palin, tells CNN they decided to take her to debate camp there because it is an "invigorating and enjoyable place to prepare for Thursday."

"SP [Sarah Palin] loves it and has her kids and Todd coming," wrote the aide in an email.

The aide said "John McCain himself came up with the idea after thinking it would be great before his next debate.

Pailin has already been hunkered down for four days in a Philadelphia hotel for debate prep with advisers.

She will take a short break Monday to attend a rally with McCain in Ohio, before heading to Arizona. 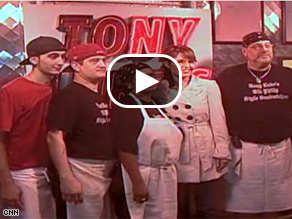 "She would not...she understands and has stated repeatedly that we're not going to do anything except in America's national security interest," McCain told ABC's George Stephanopoulos of Palin. "In all due respect, people going around and... sticking a microphone while conversations are being held, and then all of a sudden that's—that's a person's position... This is a free country, but I don't think most Americans think that that's a definitve policy statement made by Governor Palin."

Saturday night, while on a stop for cheesesteaks in South Philadelphia, Palin was questioned by a Temple graduate student about whether the U.S. should cross the border from Afghanistan into Pakistan.

"If that's what we have to do stop the terrorists from coming any further in, absolutely, we should," Palin said.

During Friday night's presidential debate in Mississippi, Obama took a similar stance and condemned the Bush administration for failing to act on the possibility terrorists are in Pakistan.

"Nobody talked about attacking Pakistan," Obama said after McCain accused the Illinois senator of wanting to announce an invasion. "If the United States has al Qaeda, bin Laden, top-level lieutenants in our sights, and Pakistan is unable or unwilling to act, then we should take them out."

McCain emphasized Sunday, Palin "shares" his view on the matter.

[cnn-photo-caption image= http://i2.cdn.turner.com/cnn/2008/images/09/23/art.thecapitol.night.jpg caption="A rescue bill was released Sunday evening."]
WASHINGTON (CNN) - A draft bill to create a $700 billion bailout of the financial industry was released by members of Congress on Sunday.

House Speaker Nancy Pelosi, D-California said she hopes the bill will be up for a vote Monday.

"We will have to have bipartisanship to pass it," she said.

At their first presidential debate Friday, September 26, in Oxford, Mississippi, Sen. Barack Obama said Sen. John McCain is proposing "$300 billion in tax cuts to some of the wealthiest corporations and individuals in the country."

END_OF_DOCUMENT_TOKEN_TO_BE_REPLACED

NEW YORK (CNNMoney.com) - The federal government would provide as much as $700 billion in a far-reaching plan to rescue the nation's troubled financial system, according to a draft of the proposed bill obtained by CNN.

The legislation is still being negotiated and elements of the bill could still change.

The core of the bill is based on Treasury Secretary Henry Paulson's request for authority to purchase troubled assets from financial institutions so banks can resume lending and so the credit markets, now virtually frozen, can begin to operate more normally.

"We talked about the economy for 40 minutes, and not once did Sen. McCain talk about the struggles that middle class families are facing every day," Obama said at a campaign event in Detroit, Michigan.

The economy took the lead in Friday night's presidential debate, as both candidates highlighted their plans to bring the United States out of what some are describing as the worst financial crisis since the Great Depression.

McCain on Sunday brushed off Obama's latest line of attack, saying he has "bigger things to worry about."

"I've got bigger things to worry about than that."

How helpful were McCain and Obama in bailout negotiations?

[cnn-photo-caption image= http://i2.cdn.turner.com/cnn/2008/images/09/28/art.ap.paulson.jpg caption="Congress and lawmakers have been working around the clock to reach a deal for the financial rescue plan."]
WASHINGTON (CNN)—Now that Congress and lawmakers have reached a tentative agreement on the financial rescue plan, some Senators are beginning to weigh in on how helpful or unhelpful it was to have their collegues John McCain and Barack Obama back in Washington D.C.

"I actually think Senator McCain and Senator Obama were one of the catalysts of this effort," Republican Senator Judd Gregg told CNN's Wolf Blitzer. "Having them here in Washington highlighted dramatically for the American people just how dangerous this situation was to folks on main street."

Not everyone is in agreement with Gregg. Also appearing on CNN, Senator Chris Dodd echoed a line from many of his Democratic colleagues, saying their presence had the adverse effect.

"Will all due respect," Dodd said. "That delayed and slowed down this process. I think we would have gotten closer to an agreement," had they not come "parachuting in."

He added, "Respectfully, John McCain did not help. In my view, that was a political stunt."

Senator John McCain, who suspended his presidential campaign last week to focus on the financial crisis, said Sunday he was not looking for credit, that Congress and Treasury Secretary Henry Paulson are the ones who deserve all of the credit for the bailout negotiations.

Scenes from the trail: Hockey fans for Obama-Biden