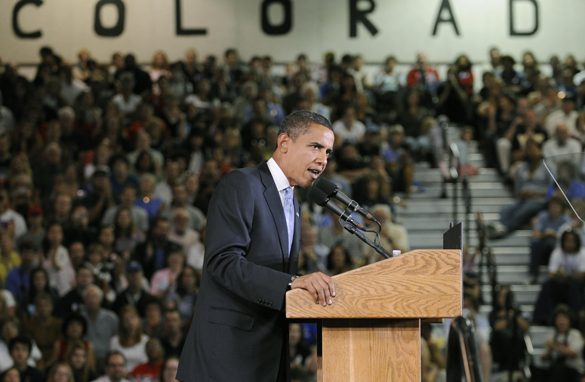 The McCain campaign said obama has failed to show leadership during the economic crisis. (Getty Images)

(CNN) - John McCain's campaign is seizing on the prepared text of Barack Obama's speech Monday in Denver, saying it shows the Illinois senator has been "out of touch" with the unfolding financial crisis and congress' economic bailout plan. (Read the prepared text [PDF])

In the text distributed by the Obama campaign Tuesday morning, Obama was to say, "And today, Democrats and Republicans in Washington have agreed on an emergency rescue plan."

But moments before Obama was set to take the stage in Denver, the House officially rejected the bailout plan, prompting a delay in the Illinois senator's rally and a change in his comments on the bill:

"I am confident we are going to get there but it's going to be sort of rocky. It's sort of like flying into Denver. You know you're going to land but it's not always fun going over those mountains," he said.

McCain spokesman Tucker Bounds suggested the fact the Obama thought the measure would pass was a sign the Illinois senator was not closely involved in helping coral support for the bailout plan.

"When Barack Obama released remarks today that praised the passage of America's economic rescue plan, just before his allies in Congress voted to kill it, it revealed just how out of touch Barack Obama has been during this crisis," Bounds said, adding Obama has "shown failed leadership we can't afford."

In his own rally Monday morning before the House officially rejected the bailout plan, McCain did not suggest the bill would pass but touted his role pushing members of his party to vote for it.

"I've never been afraid of stepping in to solve problems for the American people, and I'm not going to stop now," he said. "Sen. Obama took a very different approach to the crisis our country faced. At first he didn't want to get involved. Then he was monitoring the situation."

The McCain campaign also suggested Thursday Obama deserved much of the blame for the bill's failure, saying the Democratic presidential nominee "put politics ahead of country."