Palin has difficulty naming court case she disagrees with

"Well, let's see. There's –of course –in the great history of American rulings there have been rulings, that's never going to be absolute consensus by every American," Palin said. "And there are–those issues, again, like Roe v Wade, where I believe are best held on a state level and addressed there. So you know–going through the history of America, there would be others but–"

"Can you think of any?" Couric interjected.

"Well, I could think of–of any again, that could be best dealt with on a more local level, maybe I would take issue with," Palin responded. "But you know, as mayor, and then as governor and even as a vice president, if I'm so privileged to serve, wouldn't be in a position of changing those things but in supporting the law of the land as it reads today."

Palin's comments came in the same interview during which she gave a widely-panned answer on the economic bailout bill and had trouble describing John McCain's record on regulation of the financial industry.

Cafferty Blog: Are Palin’s interviews with Couric helping her?

When Couric posed the same question to Joe Biden, the Democratic VP candidate and longtime member of the Senate Judiciary Committee said he disagreed with a ruling that invalidated a portion of the Violence Against Women Act.

END_OF_DOCUMENT_TOKEN_TO_BE_REPLACED 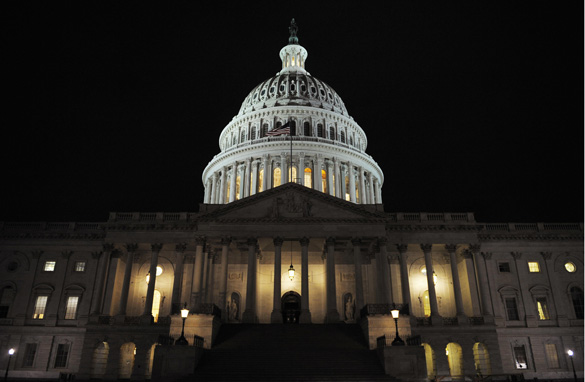 [cnn-photo-caption image= http://i2.cdn.turner.com/cnn/2008/images/10/01/art.bomichad1001.yt.jpg caption="Is an Obama ad that aired in Michigan accurate? Get the facts in this CNN Fact Check."]
The Statement: In a television ad that began airing in Michigan on Sept. 24 from Democratic Sen. Barack Obama's campaign, the narrator says Republican Sen. John McCain "refused to support loan guarantees for the auto industry. But now he's telling a different story."

END_OF_DOCUMENT_TOKEN_TO_BE_REPLACED

The independent ad is the first campaign spot in the general election to highlight Obama's lengthy relationship with Wright, a subject that generated considerable media scrutiny during the primary season but one John McCain has said should not be an issue in the race for the White House.

The ad also ties Obama to William Ayers and Tony Rezko - two prominent and controversial figures in Chicago. Ayers, a University of Chicago professor, was a founder of the 1960's radical group Weatherman that claimed responsibility for bombing the Pentagon. Rezko is a real estate developer convicted earlier this year of mail fraud, attempted extortion and money laundering who helped Obama secure a property in Chicago. Both men have been longtime supporters of Obama's political career, but the Illinois senator has said he is not close to either one of them.

A spokeswoman for the group says more than $500,000 is being spent on the ad, which is set to run in Ohio and Michigan markets through Election Day. It will also run nationally on Fox News during the upcoming debates.

The organization is classified as a 501(c)4, and as such does not have to disclose its donors to the Federal Election Commission. it's the second 501(c)4 to launch an ad attacking Obama Wednesday — Veterans for Freedom, which opposes his position on the war in Iraq, is spending more than $2 million on an ad taking aim at the Illinois senator.

"Choosing the right justices is critical for America," the ad's announcer states. "We don't know who Barack Obama would choose, but we know this: He chose as one of his first financial backers a slumlord now convicted on 16 counts of corruption. Obama chose as an associate a man who helped to bomb the Pentagon and said he ‘didn't do enough.’ And Obama chose as his pastor a man who has blamed America for the 9/11 attacks.

"Obama chose to associate with these men, while voting against these men," the announcer also says, as images of current Supreme Court Justices John Roberts and Samuel Alito are shown.

The group, which advocates naming conservative justices to the bench, says the ad is part of a $1 million grassroots campaign to "to raise awareness and recruit activists on the critical issue of the U.S. Supreme Court." The campaign will also include an extensive outreach effort including direct mail, e-mail, and text messaging.

Scenes from the trail: Bill Clinton back on the stump 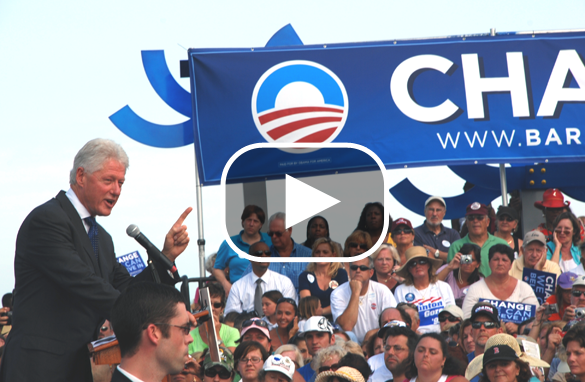 Bill Clinton was back on the campaign trail Wednesday, holding two rallies in Florida. During both he voiced an enthusiastic endorsement of Barack Obama's candidacy. (Patrick Oppmann/CNN)

Watch: Clinton back on the trail

McCain in new ad: 'What a week'

[cnn-photo-caption image= http://i2.cdn.turner.com/cnn/2008/images/10/01/art.macweekad1001.yt.jpg caption="Sen. McCain's new television ad focuses on the economy as the nation faces a financial crisis."]
(CNN) – John McCain decries partisanship in a new spot released Wednesday, pointing to battles between the two parties over the failure of a $700 billion bailout bill for the country’s troubled financial system.

“What a week,” McCain says as he looks directly at the camera in an ad that has a fireside feel. “Democrats blamed Republicans, Republicans blamed Democrats. We're the United States of America. It shouldn't take a crisis to pull us together.”

The Obama campaign fired back at McCain’s latest volley in the ad wars. “In the latest sign of his increasingly erratic campaign, John McCain is actually running an ad attacking behavior that he himself exhibited in blaming this financial crisis on Barack Obama,”Obama-Biden spokesman Hari Sevugan said in a statement released by the Obama campaign.

Since the onset of the crisis in the nation's credit markets early last week, a spate of campaign ads focused on economic issues have been released by the two campaigns and those allied with them.

END_OF_DOCUMENT_TOKEN_TO_BE_REPLACED

[cnn-photo-caption image= http://i2.cdn.turner.com/cnn/2008/images/10/01/art.ap.palin.mccain.101.jpg caption="Is the Palin trooper probe run by Obama backers?."]
The Statement
A new Web ad, "Big Top," pushes back against an Alaska Legislature investigation of Gov. Sarah Palin's firing of her public safety commissioner by accusing the leaders of "Secrecy, collusion, and October surprises. It's nothing more than a three-ring circus emceed by Obama partisans." The ad is posted at http://www.palintruthfiles.com, which was set up by the McCain campaign.

END_OF_DOCUMENT_TOKEN_TO_BE_REPLACED

Watch: John Roberts and John King on the battlegrounds

In Minnesota, where the Republican convention was held a month ago, 54 percent of those questioned are backing Obama, and 43 percent support McCain — a major jump over the 2 point advantage Obama held over McCain in last month’s poll.

And the Illinois senator appears to erased McCain’s edge in Missouri — site of Thursday’s VP debate - where 49 percent of those polled are backing Obama and 48 percent supporting McCain. One month ago, Obama was down 5 points to McCain in the last poll. The only other new poll in Missouri, a Research 2000 survey, indicates McCain ahead by one point.

“At this point, the state polls are starting to reflect the same movement we’ve seen in the national polls over the last couple of weeks,” said CNN Senior Political Researcher Alan Silverleib. “Obama has been on an upward swing ever since the meltdown on Wall Street. The economic crisis is reinforcing the country’s desire for change, which is in turn helping the Democrats. If the current trends hold and McCain loses traditional red states like Florida and Virginia, it is hard to see how he can get to 270 electoral votes on Election Day.”

END_OF_DOCUMENT_TOKEN_TO_BE_REPLACED

ST. LOUIS, Missouri (CNN)- In a tavern/restaurant here that is designed to attract sports fans– it has more than 25 flat-screen television sets mounted on its walls– a fellow on his lunch hour pulled a stool up to the bar at the beginning of this week, glanced at one of the screens that was showing football highlights, and said something to the bartender.

Who immediately picked up a remote-control clicker and, at the customer’s request, changed the channel to one showing live news from Wall Street.

Most of the TV sets in this place on this day were, in fact, tuned to national channels whose reporters were delivering business news. Sports? This week no athletic contest, regardless of how dramatic, can compete with the stomach-cramping ups and downs of the financial markets. Last-second touchdowns and ninth-inning runs-batted-in may be momentarily exciting. But when a ballgame is over, a spectator’s life and future are unchanged. “Everything is riding on this” is a sports-announcer sentence that loses its punch when compared with what an anxious family, and its lifetime savings, have riding on Wall Street economic forces over which they have no control.