McCain: Palin will do 'fine' tonight 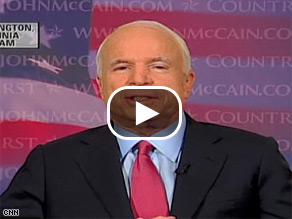 Watch: Sen. John McCain on his campaign suspension, his running mate and the VP debate..

"The fact is she'll do fine tonight. She has experience, talent, leadership. She has great inner strength. She has - an ability to lead that's been proven, taken on her own party," he said. "Joe Biden and Barack Obama have never taken on the leaders of their party on any issue. She's stood up for what's right for the people of Alaska. And she will stand up for what's right for America."

The comments come after Palin has faced criticism for her performance during recent interviews with Katie Couric. In the two separate interviews, Palin had trouble defending McCain's record on regulation issues, discussing the economic bailout, defining her foreign policy credentials, naming her preferred sources of news, and naming a Supreme Court case she disagrees with.

Asked if Couric's questions were fair, McCain said he would let the American people decide.

"I know that there have been attacks on Sarah Palin that have been remarkable to me in many ways, but I have total confidence in her. She's very comfortable in her own skin," he said.