Palin has difficulty naming court case she disagrees with 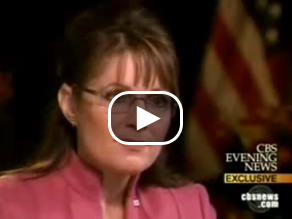 "Well, let's see. There's –of course –in the great history of American rulings there have been rulings, that's never going to be absolute consensus by every American," Palin said. "And there are–those issues, again, like Roe v Wade, where I believe are best held on a state level and addressed there. So you know–going through the history of America, there would be others but–"

"Can you think of any?" Couric interjected.

"Well, I could think of–of any again, that could be best dealt with on a more local level, maybe I would take issue with," Palin responded. "But you know, as mayor, and then as governor and even as a vice president, if I'm so privileged to serve, wouldn't be in a position of changing those things but in supporting the law of the land as it reads today."

Palin's comments came in the same interview during which she gave a widely-panned answer on the economic bailout bill and had trouble describing John McCain's record on regulation of the financial industry.

Cafferty Blog: Are Palin’s interviews with Couric helping her?

Asked on CNN's American Morning Thursday if he thought Couric's question was fair, McCain said he would let the American people decide.

"I know that there have been attacks on Sarah Palin that have been remarkable to me in many ways, but i have total confidence in her," he said. "She's very comfortable in her own skin. She's had more experience in leadership than Senator Obama and Senator Biden put together."

When Couric posed the same question to Joe Biden, the Democratic VP candidate and longtime member of the Senate Judiciary Committee said he disagreed with a ruling that invalidated a portion of the Violence Against Women Act.

"You know, I’m the guy who wrote the Violence Against Women act. And I said that every woman in America if they are beaten and abused by a man should be able to take that person to court. Meaning you should be able to go to federal court and sue in federal court the man who abused you if you can prove that abuse," Biden said. "But they said no that a woman, there’s no federal jurisdiction and I held, they acknowledged, I held about 1,000 hours of hearings proving that there’s an effect in interstate commerce."