Palin's attack delivered on the McCain campaign's announcement that it would step up attacks on the Democratic presidential candidate with just a month left before the November general election.

"We see America as the greatest force for good in this world," Palin said at a fund-raising event in Colorado, adding, "Our opponent though, is someone who sees America it seems as being so imperfect that he's palling around with terrorists who would target their own country."

Palin made similar comments later at a rally in Carson, California.

Obama's Chicago home is in the same neighborhood as Bill Ayers, a founder of the radical Weather Underground that was involved in several bombings in the early 1970s, including the Pentagon and the Capitol, and the two have met several times since Obama's 1995 campaign for an Illinois state senate seat.

END_OF_DOCUMENT_TOKEN_TO_BE_REPLACED

Posted by
Preston on Politics

[cnn-photo-caption image= http://i2.cdn.turner.com/cnn/2008/images/10/04/art.bonewportnew1004.ap.jpg caption="Sen. Obama spoke about health care at a rally in Newport News, Virginia Saturday."]
The Statement: In the vice-presidential debate on Thursday, October 2, in St. Louis, Republican nominee Gov. Sarah Palin said Democratic presidential nominee Barack Obama proposes "to mandate health care coverage and have (a) universal, government-run program. And unless you're pleased with the way the federal government has been running anything lately, I don't think that it's going to be real pleasing for Americans to consider health care being taken over by the feds."

END_OF_DOCUMENT_TOKEN_TO_BE_REPLACED 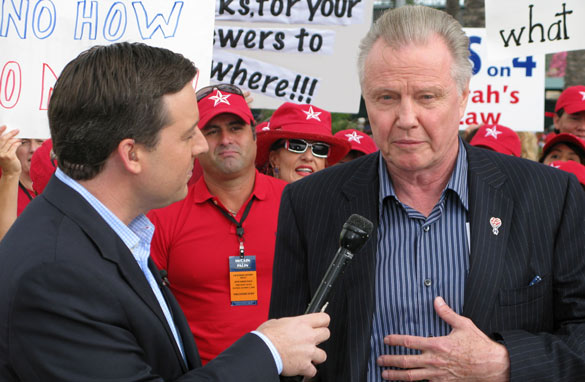 In a Saturday morning radio address, Sen. John McCain said if elected, his administration would give every family a $5,000 tax credit to buy their own health insurance or keep their current plan. "And we will open up the national health care market to expand choices and improve quality," he said.

Obama, speaking at a rally in Newport News, Virginia, said it's not that McCain "doesn't care" about what people are going through, "I just think he doesn't know," he said. "That's the only reason I can think of that he'd propose a health care plan that is so radical, so out of touch with what you're facing and so out of line with our basic values."

"Our Democratic opponent had the audacity to call John McCain's health care plan 'radical.' The American people know radical when they hear it, and John McCain is not the candidate in this election they should be concerned about."

Greene: Yes, they’re throwing a lot of it around

CAPE GIRARDEAU, Missouri (CNN)– With all the things that the presidential and vice presidential candidates are throwing at each other as Election Day grows closer, we may have found the perfect place for them to spend a few hours.

We first took note of it by chance. From the window as we crossed Missouri, we were seeing any number of billboards for restaurants and hotels– most of them chain operations. They barely registered.

But then a sign flashed by that made us turn around and try to make certain we’d seen it.

The sign– we thought– advertised a restaurant as being “The Only Home of Throwed Rolls.”

Not “thrown rolls,” which would have been odd enough– but “throwed rolls.“

We talked about it for a few seconds, but there was no chance to go back and see if our eyes had been deceiving us, because we had to get to our destination.

END_OF_DOCUMENT_TOKEN_TO_BE_REPLACED

“One Word,” a 30-second spot, focuses on McCain’s proposal to tax health care benefits that are currently not taxed. The McCain proposal would tax “your health care for the first time ever,” the announcer says. “It’s a multi-trillion dollar tax hike. The largest middle class tax increase in history,” the ad also says.

The new ad, which will begin to air nationally on Monday, was released on the same day that Sen. Barack Obama is set to give a speech focused on health care and taxes.

At a midday rally in Newport News, Virginia Saturday, Obama will call McCain’s health care tax proposal “an old Washington bait and switch” and “a shell game,” according to prepared remarks provided by the Obama campaign. “He gives you a tax credit with one hand – but raises your taxes with the other,” Obama will also say, referring to the fact that the tax credit included in McCain’s proposal will be paid to a taxpayer’s health insurance provider instead of to the taxpayer.

In a sign of how important issues economic issues like taxes and government spending have become to voters, the McCain campaign has already responded to Sen. Obama’s prepared remarks. Obama “is lying to voters,” McCain-Palin spokesman Tucker Bounds said in a statement released by the McCain campaign Saturday morning. “It’s a bald-faced lie because John McCain will improve the tax code so that middle class paychecks aren’t used to pay government bureaucrats but instead will pay for the access to health care Americans deserve,” Bounds added.

(Full script of "One Word" after the jump)

END_OF_DOCUMENT_TOKEN_TO_BE_REPLACED

(CNN) - The McCain campaign decided this week that the battleground state of Michigan may be out of reach for the Republican ticket this year - a move that's drawn criticism from one prominent dissenter: VP nominee Sarah Palin.

She also said she made her disagreement known to top campaign officials:

"I fired a quick e-mail and said, 'oh, come on! Do we have to call it there?' she said. " Todd and I would [be] happy to get to Michigan and walk through those plants [with] car manufacturers.

"We'd be so happy to get to speak with the people there in Michigan, who are hurting because the economy is hurting," she added. "Whatever we can do and whatever Todd and I can do in realizing what their challenges in that state are, as we can relate to them and connect with them and promise them that we won't let them down in the administration."

McCain aides told CNN Thursday Michigan increasingly appeared a long shot the Arizona senator and the campaign had decided to divert its resources there to other key battleground states. The latest CNN poll of polls in Michigan shows Obama with an 8 point lead in the state where the nation's economic woes have hit hard.

But Palin maintained Friday she and McCain still have a shot there.

"I want to get back to Michigan, and I want to try," she said.

"If this unconstitutional and unlawful investigation is allowed to continue, is completed, and if the resulting report is released as planned, Plaintiffs and Alaskans in general will suffer irreparable harm," lawyers for the Liberty Legal Foundation told the Alaska Supreme Court.

The Texas-based conservative group is representing Republican legislators who support Palin and are asking the Alaska Supreme Court to shut down the probe, which they call "biased."

Liberty spokeswoman Jennifer Grisham told CNN that the court had accepted the appeal and would likely hear it next week.