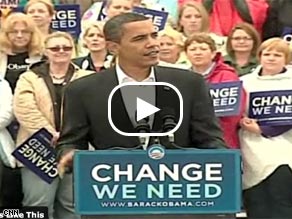 Watch and get the facts about Sen. Obama's claim.

The Statement: At a Tuesday, October 7, campaign stop in Indianapolis, Indiana, Democratic nominee Sen. Barack Obama compared his tax proposal to that of his opponent, Republican Sen. John McCain. "You've heard a lot about taxes in this campaign. Well, here's the truth - John McCain and I are both offering tax cuts," Obama said. "The difference is, he wants to give the average Fortune 500 CEO a $700,000 tax cut ... ."

The Facts: The Obama campaign bases the $700,000 claim on a Fortune 500 survey that showed the average CEO of those companies earned a salary of $12.8 million in 2007. What the statement considers a tax cut would be renewing President Bush's current cuts, which are scheduled to expire by January 2011. McCain has said he would push to renew those cuts, while Obama wants to let the cuts run out for the wealthiest Americans and offer new ones to people who make less money.

"The $700,000 in reduced taxes for CEOs comes from McCain's extending of the lower tax rates that those CEOs benefit from that were in place under the Bush tax cuts," The Tax Foundation, a nonpartisan, Washington-based tax-research group founded in 1937, wrote in an analysis of Obama's statement.

So, in effect, what Obama calls a tax cut would be keeping taxes for those wealthy CEOs the same as they are now - instead of letting them revert to what they were before Bush's cuts.