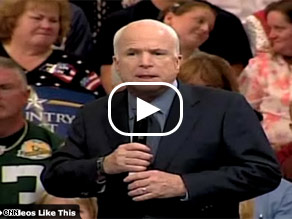 The Statement:
At a campaign event Thursday, October 9, in Waukesha, Wisconsin, Republican presidential nominee Sen. John McCain criticized Democratic opponent Sen. Barack Obama's health-care plan. "Under his plan, he will fine employers who don't offer health insurance to put their employees in government health care. He'll fine them," McCain said. "You know what that does? That costs jobs. That costs jobs for small business people in America."

The Facts:
Obama's health-care plan, as outlined on his campaign Web site, would require that large employers either "offer meaningful coverage or make a meaningful contribution to the cost of quality health coverage for their employees" or else contribute a portion of their payroll to a national fund that would help people who can't afford health care to pay for it.

The plan does not mention any criminal or civil penalties. And, by withholding a percentage of payroll, that portion of the plan seems more in line with a payroll tax than a fine - which would typically be a set dollar amount. In a section of McCain's Web site highlighting his health-care plan and criticizing
Obama's, the money in Obama's plan is referred to as a "tax," not a fine. The McCain campaign did not respond to a CNN e-mail asking for clarification on his use of the term.

McCain's suggestion that Obama's plan would impact small businesses is wrong. "Small businesses will be exempt from this requirement," Obama's Web site says.

The Verdict: False. McCain calling the plan's payment a fine is at odds with his own Web site, which calls it a tax. Obama's campaign says small businesses would be exempt from the plan.