[cnn-photo-caption image=http://i2.cdn.turner.com/cnn/2008/images/10/15/art.obama.blur.mccain.copy.jpg]
(CNN) – During Wednesday night’s presidential debate, Barack Obama ducked a question on whether or not he thought Sarah Palin is qualified to be president.

“That's going to be up to the American people,” Obama said. “I think that obviously she's capable politician. She has, I think, excited the base in the Republican Party and I think it's very commendable, the work she's done on behalf of special needs.”

John McCain said he thinks Joe Biden, Obama’s running mate, is qualified to lead the country, but that he has been “wrong” on a variety of foreign policy issues. McCain said Biden voted against the first Gulf War and that he wanted to divide Iraq into three separate countries.

“There are several issues in which frankly Joe Biden and I openly and honestly disagree on national security policy,” McCain said. “And he's been wrong on the major ones.”

HEMPSTEAD, New York (CNN) - A majority of debate watchers thought that Barack Obama won the third and final presidential debate, according to a national poll conducted at the end of the debate.

The poll was conducted by telephone with 620 adult Americans who watched the debate. The audience for this debate appears to be just a little bit more Democratic than the U.S. population as a whole. Forty percent of debate-watchers in this poll were Democrats and 30 percent Republicans. The
survey's sampling error is plus or minus four percentage points.

Gergen: Three in a row for Obama

John McCain had a very strong start in the first 30 minutes or so, and I thought that he was heading toward a debate victory - his first. But he veered off course in the middle as the conversation turned toward the negative quality of the campaign - and he became more and more the angry, older candidate, bringing back memories of the performance by Bob Dole back in 1996 that helped to doom his campaign. He also seemed to grow more tired over the course of the debate.

Barack Obama had a good first answer about his economic plan then seemed flat for the rest of the first half hour. But then things picked up for him. During the assaults by McCain, he kept his cool - he never took the bait (rumors were heavy before the debate that McCain would try to goad him into losing his steadiness). Coming out of that second half hour, Obama became much stronger in the last third of the debate, scoring extremely well on health care, education, abortion, and the Supreme Court.

Overall, I would score Obama at an A minus for the night, and McCain at a B plus.

It appears that Obama will come out of these debates with a general public perception that he has won three in a row.

PS: A hearty salute to tonight's moderator, Bob Schieffer, he deserves an A plus.

“Sen. Obama, I am not President Bush,” he said. “If you wanted to run against President Bush you should have run four years ago. I will take this country in a new direction."

McCain advisors – who said they had been pushing him to stress that distinction more explicitly than he had in the past - immediately uploaded the quote to YouTube, and circulated it to reporters.

The final presidential debate comes to a close 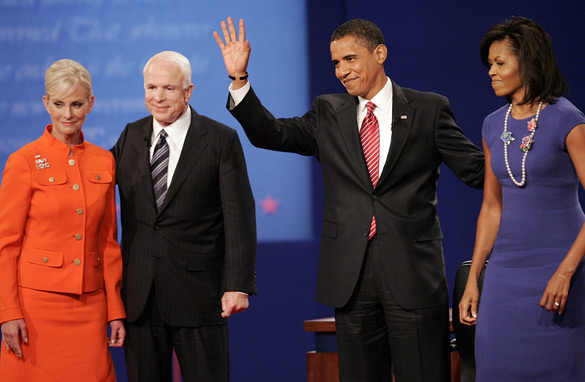 Cindy McCain and Michelle Obama join their husbands on stage as the final presidential debate comes to a close at Hofstra University in Hempstead, New York.(CNN PHOTO)

The Statement
Sen. Barack Obama said at the Oct. 15 debate at Hofstra University that Republican opponent John McCain's plan to stem the mortgage meltdown "could be a giveaway to banks if we're buying full price for mortgages that now are worth a lot less. And we don't want to waste taxpayer money."

END_OF_DOCUMENT_TOKEN_TO_BE_REPLACED

Watch: McCain and Obama on abortion

But he qualified the statement a moment later, saying he would base his nominations on "qualifications" - and that he did not believe a judge who supported Roe v. Wade, the case that legalized abortion, "would be part of those qualifications."

McCain hammered his Democratic opponent, Barack Obama, on abortion, accusing him of "aligning himself with the extreme aspect of the pro-abortion movement in America."

Obama rejected the charge out of hand, saying: "Nobody is pro-abortion."

He advocated sex education as a way of reducing the number of unintended pregnancies that result in abortions.

"We should try to prevent unintended pregnancies by providing appropriate education to our youth, communicating that sexuality is sacred and they should not be engaged in cavalier activity," he said.

Fact Check: Did Obama vote to raise taxes for people making as little as $42,000?

END_OF_DOCUMENT_TOKEN_TO_BE_REPLACED

[cnn-photo-caption image=http://i2.cdn.turner.com/cnn/2008/images/10/15/art.mccainobama.copy.jpg]
HEMPSTEAD, New York (CNN) - Both Obama and McCain are free traders, but McCain's problem is that he is a more full-throated ideological free trader and that doesn't play well in economic times of trouble.

The public is very suspicious of free trade.

Crowley: We finally get a show 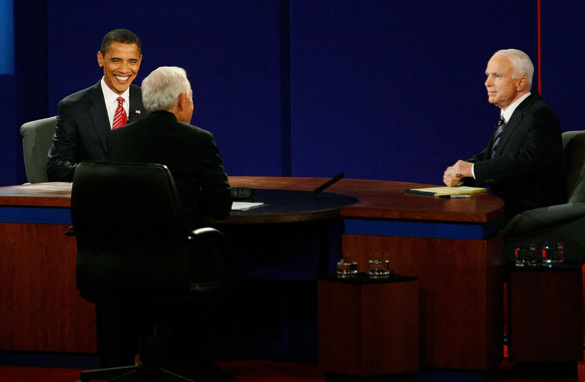 HEMPSTEAD, New York (CNN) - This is by far the most interesting debate of the three. They are engaging each other. They both brought their game.