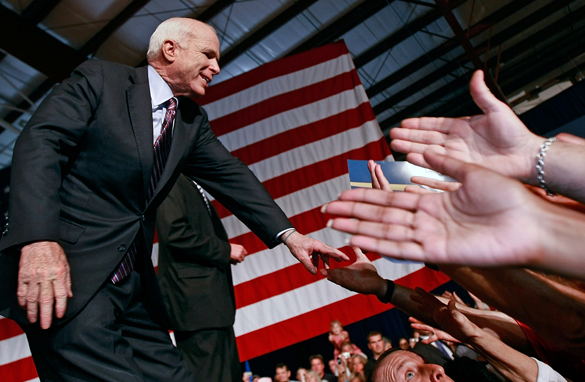 According to the new surveys, McCain is still slipping in Pennsylvania, Florida, and even Colorado - a state that hasn't voted for a Democratic presidential candidate since 1992.

In the new Pennsylvania poll of polls, McCain now trails Barack Obama by a 13 point margin, 53-40 percent. That deficit is up from 12 points in a poll of polls released earlier this week.

In Florida, the state that handily voted for President Bush in 2004, McCain trails Obama by 4 points in the latest CNN poll of polls, 49-45 percent. That's up from a 3 point gap there over the weekend.

And in Colorado, a longtime Republican stronghold where McCain has held the advantage for months, the new CNN poll of polls shows Obama on top by 6 percentage points, 50-44 percent. Earlier this week, Obama held a 5-point lead over McCain.