Fact check: Has the Obama campaign launched 'political attacks' against 'Joe the Plumber?' 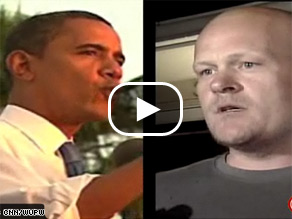 Is Sen. Obama attacking Joe the plumber? Watch and get the facts!

The Statement: Republican presidential candidate Sen. John McCain, speaking at a rally in St. Charles, Missouri, on Monday, October 20, said "Joe the Plumber," an Ohioan who has become a central figure on the campaign trail, "didn't ask for the political attacks on him from the Obama campaign."

The Facts: Sen. Barack Obama and Samuel J. Wurzelbacher, a plumber, discussed taxes on small businesses during a campaign stop on October 12 outside Toledo, Ohio. Wurzelbacher said he was about to buy a company that makes more than $250,000 a year and was concerned that Obama would tax him more because of it.

McCain - who seized on the exchange at last week's presidential debate in Hempstead, New York - dubbed the man "Joe the Plumber" and characterized him as a symbol of an everyman entrepreneur who would be burdened by Obama's tax plan. Since then, Wurzelbacher's life has been under a media microscope, and news outlets reported details including the fact that Wurzelbacher didn't have a plumbing license.

McCain spokesman Brian Rogers gave CNN three examples of "political attacks" the campaign says the Obama camp has made on Wurzelbacher - each from October 16:

–Obama said on MSNBC's "Race For the White House," that McCain is "trying to suggest that a plumber is the guy he is fighting for. How many plumbers do you know making $250,000 a year?"

–Sen. Joe Biden said on "The Tonight Show" that "I don't know many plumbers who are making $250,000 a year and worried about it. We're kind of worried about Joe the fireman, Joe the policeman, Joe the real plumber with a license."

In an interview with CNN on October 16, Wurzelbacher clarified that the company he wants to buy makes well less than $250,000 a year - which Obama says means his taxes would not be increased. Families making more than $250,000 could see taxes go up under Obama's plan, according to the campaign, while those making less than that amount would not see any raise.

The Verdict: In Dispute. McCain regards these comments as political attacks on Joe Wurzelbacher, but the comments also can be interpreted as Obama campaign commentary on the McCain campaign's rhetoric.