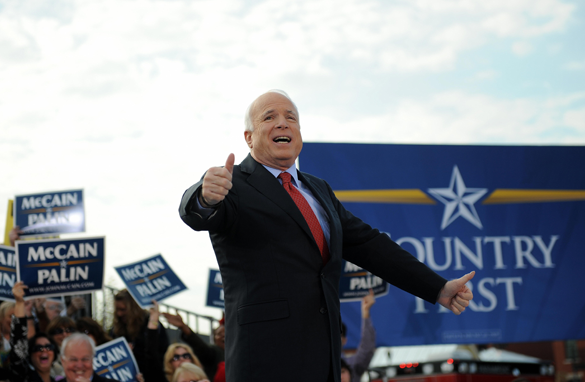 (CNN) - A growing number of Americans believe John McCain has attacked Barack Obama unfairly, a negative perception of the Arizona senator that could cost him at the polls come Election Day.

According to a new survey from CNN and the Opinion Research Corporation, nearly 6 in 10 Americans believe the Republican nominee has unfairly gone negative in his bid for the White House. That percentage is significantly higher than it was last September, when just 42 percent thought the Republican Presidential nominee was running an overly negative campaign, and is also considerably higher than the percentage of Americans who feel Obama has gone unfairly negative.

In recent weeks, both campaigns have stepped up spending on negative television ads and launched attacks at each other's record. But comments from both McCain and Republican VP candidate Sarah Palin questioning Obama's relationship with former 1960's radical William Ayers have drawn particular scrutiny, as has the GOP ticket's recent suggestion Obama will seek to carry out 'socialist' policies.

Obama's image may also be benefiting from his huge financial advantage, which has led to a massive imbalance in the number of ads he is able to air compared to McCain. Campaign Media Analysis Group's Evan Tracey, CNN's consultant on ad spending, says Obama has the luxury of running both positive and negative ads — simultaneously softening his own image and hurting McCain’s.

"McCain can't afford the positive ads Obama can," Tracey said. "It's not likely McCain can raise his own positives with only a couple weeks left - but he can hope to raise Obama's negatives."

But the clear perception that the Arizona senator has run a more negative campaign than Obama just may hurt the Republican presidential nominee's chances of a comeback in this long race's dwindling days.

"In previous elections, both candidates have been viewed as attacking the other unfairly, so the penalty for doing so has tended to cancel out in past years," CNN Polling Director Keating Holland said. "But this year McCain faces that problem all by himself, so any blowback affects only him while Obama seems above the fray."