Cafferty: Why are so many voters still undecided?

After the longest and most expensive presidential campaign in history, 7% of likely voters are still not sure who they're going to vote for. And the election is now less than two weeks away. These are the findings in the latest CNN Poll of Polls. So what's the problem? Maybe if you haven't figured it out by now you should not be allowed to vote.

Maybe it's the issues. We've had three presidential debates, one vice presidential debate, one economic meltdown, a $700 billion financial bailout package, a couple of wars and countless arguments about under whose plan you and I would pay more in taxes and for health care.

Or maybe it's the mud-slinging…

“Joe sometimes engages in rhetorical flourishes. But I think that his core point was that the next administration is going to be tested regardless of who it is,” Obama told reporters after meeting with his national security working group. “The next administration is going to be inheriting a whole host of really big problems and so the president is going to be tested and the question is will the next president meet that test by moving America in a new direction by sending a clear signal to the rest of the world that we are no longer about bluster and unilateralism and ideology but we’re about creating partnerships around the world to solve practical problems.”

Obama added that with the economy in a “free fall” the United States is more vulnerable than ever. He said because of the Bush administration’s policies the next president will have to deal “with two unresolved wars, Bin Laden and Al Qaeda communicating regularly and training folks to potentially attack America.”

The McCain-Palin ticket seized on Senator Joe Biden’s comments made at a west coast fundraiser to highlight what they say is Obama’s inexperience, and have said on the stump Obama would need “on the job training.”

Obama dismissed the notion that his group of national security and foreign policy advisors were scrambled together in Richmond to counter Biden’s remarks and the Republican attacks.

“It would be pretty hard to gather this group in two days. They have pretty busy schedules. We actually had this planned about two weeks ago, two to three weeks. It was prompted by the fact that I was focused fairly single mindedly on the financial crisis and I asked my staff to convene this group because I think it’s very important at a time when we are so focused on the economy, and rightly so, that we not lose sight of that fact that we remain threatened and there are a whole host of international challenges that we’re going to have to deal with,” he said flanked by fifteen members of that group, including former Sen. Sam Nunn and several high ranking retired military officers.

Palin flies over corn-cut image of herself

AKRON, Ohio (CNN) - Shortly after taking off from Toledo on a flight bound for Akron, Sarah Palin’s campaign plane twice circled around a now-famous image of the Alaska governor etched into a golden cornfield in northeast Ohio, offering Palin a surreal chance to look down on the outsized agricultural rendering of herself.

The portrait, which reads “Sarah America,” was cut out of 16-acres of corn in Whitehouse, Ohio by designers hired by Duke and Martha Wheeler, who hope to attract visitors to their Corn Maze at The Butterfly House, a local tourist attraction.

Palin and her family peered down on the corn-carved candidate from their windows, with several members of her senior staff clamoring over to the left side of the plane to join them.

Since many on the plane apparently missed the initial glimpse of the corn candidate, the pilot circled the JetBlue charter jet around for another pass, allowing members of the campaign apparatus to snap pictures.

CNN Poll of Polls: Obama ahead by seven points

In Wednesday’s poll of polls, Obama’s support with likely voters stands at 50 percent and McCain’s at 43 percent. Seven percent of those surveyed are unsure about their choice for president.

CNN’s poll of polls does not have a sampling error.

[cnn-photo-caption image= http://i2.cdn.turner.com/cnn/2008/images/10/22/art.obamapresser.ap.jpg caption="Obama talked with reporters Wednesday following a meeting with national security advisers."](CNN) - Sen. Barack Obama said Wednesday that the country needs a leader who "understands the connection between our economy and our strength in the world."

"We often hear about two debates - one on national security and one on the economy - but that is a false distinction.

"We can't afford another president who ignores the fundamentals of our economy while running up record deficits to fight a war without end in Iraq," he told reporters following a meeting on national security policy.

Obama charged that Sen. John McCain would continue "the policies that have put our economy into crisis and endangered our national security."

He attacked Barack Obama, his Democratic rival for the White House, for saying that "when you spread
the wealth around, it's good for everybody."

"That is "certainly not something I would ever do," he said in an interview with CNN's Wolf Blizter that is to air on "The Situation Room" at 6 p.m. ET.

Obama made the comment as he defended his proposal to raise taxes on couples earning more than $250,000 a year while cutting taxes for those with lower incomes.

McCain contended that Obama has been "all over the place" with his economic proposals.

Obama camp out with response robocall

According to the Web site Talking Points Memo, the call features Jeri Watermolen, a former McCain backer who has turned to support Obama because of the McCain campaign’s robocalls which ‘viciously—and falsely’ attack Obama.

“Hi, this is Jeri Watermolen, calling for the Campaign for Change. I live in Green Bay and, like you, I've been getting sleazy phone calls and mail from John McCain and his supporters viciously - and falsely - attacking Barack Obama. I used to support John McCain because he honorably served our country - but this year he's running a dishonorable campaign.”

END_OF_DOCUMENT_TOKEN_TO_BE_REPLACED

Greene: Just how divided are we? 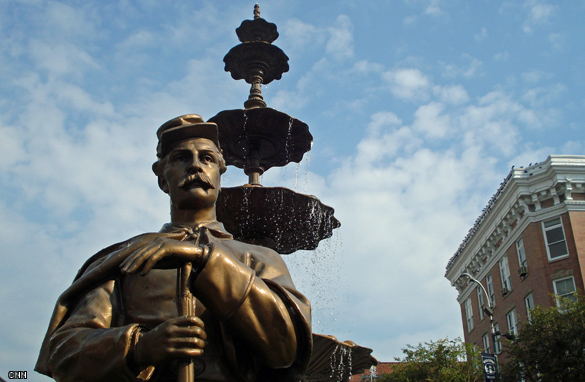 MARTINSBURG, West Virginia (CNN)– “The most divided this country has ever been.”

You hear that phrase tossed around almost casually from time to time during this presidential campaign. Usually it is used to point out the ugliness into which the campaign sometimes has descended.

And, indeed, with the occasional campaign-season talk of what and what does not constitute the “real America,” and of which candidate is the most loyal to the values of the United States, the rhetoric by supporters of both candidates does tend to get more than a little unpleasant, even inflammatory.

But the most divided the country has ever been?

END_OF_DOCUMENT_TOKEN_TO_BE_REPLACED

The McCain campaign says the 30-second spot will air in “key states.” The ad follows up on a Web video launched last week that also features the Wurzelbacher exchange with Obama .

(full script of “Sweat Equity” after the jump)

END_OF_DOCUMENT_TOKEN_TO_BE_REPLACED 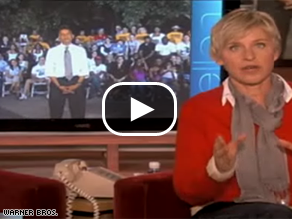 MIAMI, Florida (CNN) – Barack Obama lauded his wife Michelle at his evening event for being a better speaker than he is. Apparently she is also a better dancer.

The Democratic presidential nominee taped an appearance for the "Ellen DeGeneres Show" after his rally on a makeshift set behind the press filing tent. DeGeneres told Obama that when Michelle appeared on her show "she was talking some smack" about his dance "moves."

Standing in front of a few rows of supporters, Obama danced to James Brown's "Get Up Offa That Thing" much to the delight of the talk show host.

Obama told DeGeneres that his daughters were opting for scary Halloween costumes this year. He said Sasha, the younger daughter, is planning to be a "corpse bride" and Malia will be an "evil fairy."

"I've got to admit they both look too cute. They're not scary enough for my taste," he said.

The segment will air on Wednesday.