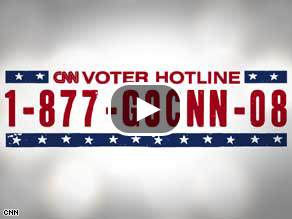 (CNN)  – The end of the presidential campaign may be days away, but with the rising popularity of early and absentee voting, millions of voters are weighing in long before Election Day.

The hotline has received roughly 10,000 calls since it went live the middle of last week and viewers have reported a variety of problems and issues.