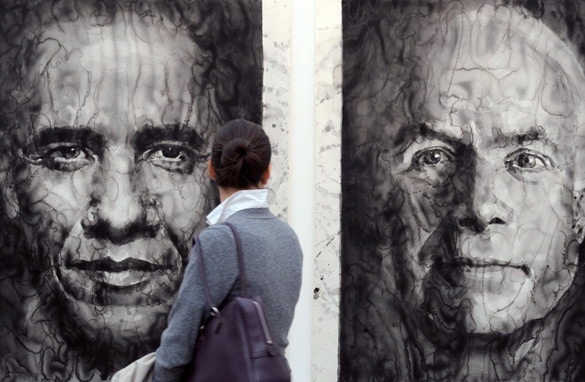 A woman in Paris looks at a giant photo of the U.S. presidential candidates.(Getty Images)

WASHINGTON (CNN) - A new national survey suggests that race won't be a major factor in the outcome of the presidential election.

Seven out of ten Americans questioned in a CNN/Opinion Research Corporation Survey released Friday say that the race of the candidates will not be a factor in their vote for president this year. That 70 percent figure is up 9 points from July, when the same question was asked. Only 5 percent of those polled say race will be the single most important factor in their choice for president, with 11 percent saying it's one of several important factors, and 13 percent indicating race will be a minor factor in their vote.

Barack Obama, if elected, would be the first black American to win the White House.

So how will race affect the results on election day?

"First, don't assume that everyone who says that race is factor in their votes are voting against Obama,” says CNN Polling Director Keating Holland.

He adds that some voters are choosing Obama because of his race - and that many of those who say that race will influence their votes are Republicans who were highly unlikely to vote for any Democrat this year.

"By one complicated measure, the number of votes Obama may lose due to his race is roughly equal to the number who will vote for him because he is black. And both those numbers appear to be small, possibly just one percentage point in each direction," says Holland.

One question that often comes up when discussing polling regarding race is whether those being polled are telling the truth. Holland says that the survey results should be taken with a grain of salt: “ race is a complicated topic and polls may not reveal each respondent's true feelings on this hot-button issue,” says Holland.

Nonetheless, the poll suggests that race may largely be an influence on Americans who aren't typical Democratic voters, and that race works both for and against Obama in roughly equal proportions.

What about the age question? If elected, 72-year-old John McCain would be the oldest person to be inaugurated as president.

The CNN/Opinion Research Corporation poll was conducted October 17-19, with 1,058 adult Americans questioned by telephone. The survey's sampling error is plus or minus 3 percentage points.