[cnn-photo-caption image= http://i2.cdn.turner.com/cnn/2008/images/10/26/art.palin.countryfirst.jpg caption="Palin said Saturday she was 'annoyed' with Couric after her interview."]
FORT WAYNE, Indiana (CNN) – Campaigning Saturday in Fort Wayne, Indiana, a city once represented in Congress by another vice presidential candidate named Dan Quayle, Sarah Palin delivered one of her longest stump speeches to date and revealed that she was “annoyed” with the line of questioning presented by Katie Couric in her now-infamous interview with CBS.

Palin reprised a story she last told a week ago in Noblesville, Indiana about her sit-down with Couric, which was widely panned.

“Last time I was here I got to tell a crowd that I had to give a national interview that didn’t go so well,” she said. “And it was because I was kind of annoyed with the questions that I was being asked because I thought they were kind of irrelevant to, you know, national security issues and getting our economy back on track, so I kind of showed some of that annoyance.”

Couric did, in fact, ask Palin several questions about the economy and national security, focusing in particular on the congressional bailout package, the mortgage crisis, John McCain’s record on regulation, the war in Afghanistan, hunting terrorists in Pakistan, Russia, Iran, Syria, Israel and the role of the United States in the world.

Palin joked, however, about another line of questioning.

“But I think the one question that I answered that everyone could agree on, it maybe shows where my heart is... too is, she asked me this relevant question: What was my favorite movie? And I said ‘Hoosiers!’”

The governor continued to press the campaign’s message of the day: that Barack Obama and congressional Democrats will, if elected, expand government and redistribute the hard-earned dollars of regular Americans, criticisms that brought on accusatory shouts of “socialist!,” “Communist!” and, at one point, “Hussein the socialist!”

Palin said that on election day, “what we're going to have to do together, voters, what we have to do is fight for what is right and free and uniquely American. Let us put our trust in each other, not big government.”

The Indiana crowd - easily Palin’s largest of the day - was warmed up by country legend Hank Williams, Jr., who often appears at Palin campaign events to perform his recently-penned ode to the GOP ticket: “McCain-Palin tradition.”

But Williams may have been channeling the enthusiasm of the crowds for Palin - and also reflecting recent reports that Palin is “going rogue” with an eye toward the 2012 presidential race. At one point during his performance, he intentionally scrambled the song’s lyrics and put the Alaskan at the top of the ticket, praising a “Palin-McCain tradition.”

That musical witticism earned Williams a loud cheer from the crowd.

[cnn-photo-caption image= http://i2.cdn.turner.com/cnn/2008/POLITICS/10/26/campaign.wrap/art.mccain.gi.jpg caption="Sen. John McCain says his campaign is "very competitive" in key states."]
(CNN) - Despite his sagging poll numbers, Sen. John McCain said Sunday that he is "very happy with where we are" and very proud of his campaign.

"We're doing fine," the Arizona senator said in an interview on NBC's "Meet the Press." "We are very competitive in many of the battleground states."

CNN Election Tracker: Take a look at the latest polling across the country

McCain brushed off polls that show him trailing Sen. Barack Obama, saying those numbers are "all over the map."

"Those polls have consistently shown me much further behind than we actually are. It all depends on the voter turnout ... we're doing fine. We have closed in the last week." he said. State-by-state polling

[cnn-photo-caption image= http://i2.cdn.turner.com/cnn/2008/images/10/26/art.evotingsign1026.gi.jpg caption="Residents in Florida have run into long lines as they vote early."]
(CNN) – November 4 is still more than a week away, but voters are already encountering long lines in their efforts to vote early.

Callers to CNN’s voter hotline have reported long lines in Gary, Indiana. James Brown, a Gary resident, told CNN that there were only two machines available to cast ballots at the city’s courthouse for the 25-40 people who were there with Brown when he went to vote early.

A local official told CNN the problem is not limited just to Gary. “There are long lines everywhere,” said Ruth Anne Hoagland of the Lake County Elections and Registrations Board. “They are out the door.” Hoagland also said that turnout has been strong during early voting and voters should expect at least an hour wait.

Another Lake County election official told CNN that early voting centers in Gary and other parts of the county need more computers to check voter registrations. The official assured CNN that the issue would be resolved by Election Day.

Florida, ground zero for many concerns about voting irregularities during the 2000 presidential race, is also experiencing long lines during early voting. One caller to CNN’s hotline reported that her 85-year-old mother encountered a four-hour wait to vote in Broward County. CNN’s John Zarella found similar problems. Watch Zarella’s report about long lines in Broward on the first day of early voting. 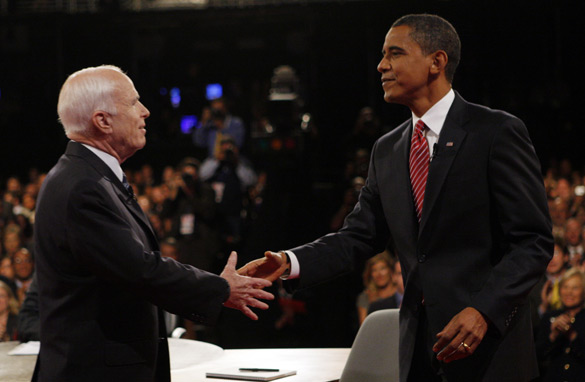 Facing the worst economic storm since Franklin Delano Roosevelt won the 1932 election, this president-elect will have to quickly announce his key staffers and policy priorities to reassure both the nation and the world.

"The incoming president will be facing many bigger challenges than any president since Roosevelt," said John Kamensky, senior researcher at the IBM Center for The Business of Government, which focuses on public management. "The president will have to have a very organized transition to be able to address it."

Obama: McCain is to Bush as Robin is to Batman

[cnn-photo-caption image= http://i2.cdn.turner.com/cnn/2008/images/10/23/art.mccainbush.ap.jpg caption=" Obama compared Pres. Bush and McCain to Batman and Robin."]
ALBUQUERQUE, New Mexico (CNN) - Barack Obama took his comparisons of John McCain and President Bush one step further Saturday night at a rally in New Mexico, implying the two Republicans are like the duo of Batman and Robin.

"John McCain suggested that he would be the one to change George Bush's policies," Obama said, before adding that if that were to happen it'd be "like Dick Cheney attacking George Bush."

"It's like Robin getting mad at batman. John McCain hasn't been a maverick. He's been a sidekick when it comes to George Bush's economic policies.”

Earlier in the weekend, Obama said running mate Joe Biden had said McCain criticizing Bush would be "like Tonto getting mad at the Lone Ranger."

Biden never actually said that - but he has made similar references using Butch Cassidy and the Sundance Kid.

The Illinois senator heads to battleground Colorado for events Sunday.

[cnn-photo-caption image= http://i2.cdn.turner.com/cnn/2008/images/10/26/art.voter.hotline.cnn.jpg caption="Call CNN's voter hotline with your concerns or problems with voting."]
(CNN) – Ordinarily, there’s a world of difference between Sen. Barack Obama, the Democratic nominee for president, and former Georgia congressman Bob Barr, the Libertarian Party’s nominee. But voters tell CNN that machines in Knox County, Tennessee had them confused about which of the two men they were voting for.

“On the summary page, after I voted for Barack Obama, when you summarize before you hit ‘cast ballot,’ it says ‘BAR’ for my vote,” Russ Manning of Knoxville, Tennessee said in one of the calls CNN received about Knox County. With Barr’s name also on the ballot, Manning was concerned that machine was about to incorrectly record his vote for Obama as a vote for Barr. “And, so I had to go back and forth several times to make sure I was voting for the right person. With everybody else on the ballot, the names are completely spelled out but you only get ‘BAR’ for Barack Obama and ‘BOB’ for Bob Barr as I finally figured out.”

Local election officials in Knox County are aware of the issue and are working to inform voters and poll workers about that the unusual references are actually to the first three letters of each man’s first name. "'It’s because of the electors,’” Greg Mackay, the Knox County administrator of elections, told the Knoxville News Sentinel recently. "'It’s just on the president. It says ‘electors for’ on the summary page and the first three letters for the candidate of your choice.’” Mackay also told the newspaper he has received two or three complaints about the summary page of the county’s voting machines during the first week of early voting. 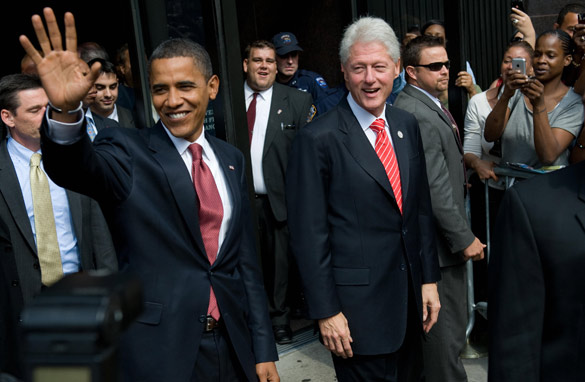 (CNN) – In yet another sign that Democrats are putting the contentious and hard-fought primary season behind them, former President Bill Clinton will campaign with Sen. Barack Obama for the first time in Florida on Wednesday, according to Matt McKenna of the Clinton Foundation.

Sen. Hillary Clinton will not attend the event but did recently campaign with Obama in Florida, a crucial battleground state that CNN currently considers a toss-up.

The Clintons also recently campaigned together with Sen. Joe Biden and Biden’s wife, Jill, in Scranton, Pennsylvania, where both Joe Biden and Sen. Clinton have roots.