[cnn-photo-caption image= http://i2.cdn.turner.com/cnn/2008/images/10/28/art.boreach1028.gi.jpg caption="Sen. Obama reaches up to greet eager supporters last week in Richmond, Virginia. Obama is scheduled to be in Virginia again Tuesday."]
(CNN) – The Virginia State Board of Elections is putting the word out: November 4 is Election Day for everyone in the state, regardless of political party.

The state agency issued a “Rumor Buster” press release this week with the correct date for voting in next week’s election because a fake flyer has been circulating with false information.

The flyer said incorrectly that Republicans and Republican-leaning independent voters should vote November 4 and that Democrats and Democratic-leaning independents should vote November 5. The flyer claims that the separate dates for voting by party were enacted by the Virginia legislature to ease the strain on the polls during high turnout that is expected.

But, the flyer’s information is false. “The State Board of Elections did not issue this flyer,” the agency said in a statement. “Election Day is Tuesday November 4 and all registered voters will be able to cast their vote on that day. The polls are open from 6:00 a.m. to 7:00 p.m. Anyone in line at 7:00 p.m. will be able to vote.”

The fake flyer has been circulating in the Hampton Roads area of Virginia, according to the State Board of Elections. The Virginia State Police refused to comment on the flyer because it is part of an “ongoing criminal investigation.” 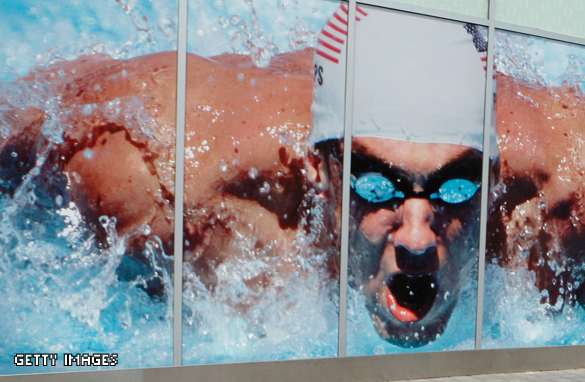 TERRE HAUTE, Indiana (CNN)– Unfortunately for John McCain and Barack Obama, the Michael Phelps Syndrome does not apply to them.

Or at least it will soon not apply to one of them– the one who, a week from tonight, will be elected president.

The Michael Phelps Syndrome– relatively new in our attention-flitting society– dictates that, no matter how famous you are today, you’ll be much less famous a few months from now.

In August, the entire nation, and much of the world, was fixated on Phelps‘ quest for eight Olympic gold medals. You would overhear people talking about him on the street and in restaurants.

The new half-life of fame being what it is, though, today– and this is still only October– August seems years distant. Phelps is a well-known guy, with endorsement contracts in place, but he is not at the center of the universe. That was a summer thing.

END_OF_DOCUMENT_TOKEN_TO_BE_REPLACED

[cnn-photo-caption image= http://i2.cdn.turner.com/cnn/2008/images/10/28/art.countryfirst1028.gi.jpg caption="Sen. McCain and Gov. Palin campaigned in Fairfax County, Virginia last month. Their campaign has tried to bring attention to a legal snag that could have caused some overseas absentee ballots from Virginia voters to be rejected."]
(CNN) – Virginia’s Attorney General is weighing in on the conflict between federal law and a Virginia statute that could have caused some absentee ballots from overseas to be rejected by Fairfax County, Virginia.

But here’s the issue: neither the federal absentee write-in ballot itself nor its instructions mentions Virginia’s requirement that the witness’s address be included. In fact, the ballot form doesn’t even have a space to write down the witness address which Virginia requires.

In a formal legal opinion issued Monday night, Robert McDonnell concluded that federal law controls over the conflicting Virginia law. The opinion clears the way for roughly 60 overseas absentee ballots in Fairfax County to be counted in next week’s election returns and perhaps more ballots in the same predicament throughout Virginia.

END_OF_DOCUMENT_TOKEN_TO_BE_REPLACED

(CNN)—Both presidential candidates are working overtime in Pennsylvania Tuesday. In the latest installment of CNN=Politics Daily, CNN’s Suzanne Malveaux reports on Obama’s final pitch to the country, while CNN’s Dana Bash has the details on McCain’s efforts to win Pennsylvania’s 21 Electoral Votes, a state he is currently behind in the polls.

Plus: Sen. Ted Stevens was found guilty on seven counts Monday. CNN’s Joe Johns explains the verdict and what it means for his already tough re-election bid in Alaska.

(CNN) - Even before the current economic crisis, voters listed the economy as the top issue in the presidential election.

In a CNN.com special report, Battleground Voters, we talked to voters in five battleground states - Colorado, Florida, Missouri, North Carolina and Ohio - to find out how the economy would influence their choice for president.

In the first of four parts, we talked to small-business owners, who have been at the center of John McCain's and Barack Obama's plans on how they would get the ailing economy back on track.

CNN's special report on battleground voters continues Wednesday with a look at students, Thursday with retirees and Friday with unemployed voters.

[cnn-photo-caption image= http://i2.cdn.turner.com/cnn/2008/images/10/28/art.cnnlive1.cnn.jpg caption="Watch the event on CNN.com/live."](CNN) - John McCain and Sarah Palin are holding a joint-campaign event in Hershey, Pennsylvania this hour.

END_OF_DOCUMENT_TOKEN_TO_BE_REPLACED

(CNN) - The McCain campaign released an ad Tuesday telling voters Barack Obama wants to “spread your income” as the GOP ticket continues its push to paint the Democratic nominee as an advocate of socialist policies.

"Your choice," says the female announcer in the 30-second spot. A picture of Obama appears while the announcer says, "spread your income.

"Keep what's yours," the voice declares as a photo of McCain is displayed.

The ad also tells viewers Obama is "risky," while McCain is "proven."

"For a stronger America, McCain," the announcer concludes.

The McCain campaign said the ad would air in “key states.”

[cnn-photo-caption image= http://i2.cdn.turner.com/cnn/2008/images/09/07/art.kennedywave0907.gi.jpg caption=" Kennedy is heading back to Washington this afternoon."]
WASHINGTON (CNN) - Democratic Sen. Ted Kennedy plans to return to Washington Tuesday for the second time following an operation for a brain tumor in June, his spokesman said.

"Weather permitting, Senator Kennedy plans to leave Hyannis Port to spend time at his house in Washington later this afternoon. He hasn't been there for months and he thought this would be a good time to be back. He plans to return to the Cape for Thanksgiving," spokesman Anthony Coley said.

Kennedy has not decided if he will attend the "lame duck" session of the Senate following next week's elections, Coley said. The 76-year-old senator is not up for re-election this year.

In July, Kennedy made a dramatic visit to the floor of the Senate to cast a vote to help break a deadlock on an important Medicare bill.

[cnn-photo-caption image= http://i2.cdn.turner.com/cnn/2008/images/10/16/art.mccainad.cnn.jpg caption=" The RNC has increased ad spending in Montana."]
QUAKERTOWN, Pennsylvania (CNN) - In a sign of last-minute concern about a traditionally red state, the independent arm of the Republican National Committee is launching television ads in Montana.

Democrats have only won Montana twice in the last half century, but Barack Obama has been using his vast resources for an aggressive push there - an Obama spokesman says they have 19 offices and 14,000 volunteers. John McCain has no Montana campaign offices.

"It's a cheap insurance policy" said a Republican official involved with the ad buy told CNN. "We don't expect a crash there, but we may as well buy insurance in case we do."

Recent polling has suggested McCain’s edge over Obama in the state may be in single-digit territory.

By law, the so-called Independent Expenditure arm of the Republican National Committee can produce TV ads and buy air time, as long as it does not coordinate with the party.

Montana now has two Democratic senators and a Democratic governor. Obama’s campaign already has an organization in the state thanks to the Democratic primary in June, which he won.

A senior McCain aide told CNN they are relying on a "very good state party" that has a few offices around the state.

ON THE TRAIL: Obama in Pennsylvania

[cnn-photo-caption image= http://i2.cdn.turner.com/cnn/2008/images/10/28/art.cnnlive.jpg caption="Watch the event on CNN.com/live."] (CNN) - Barack Obama held a campaign rally in Pennsylvania earlier Tuesday, during which he continued to make what his campaign is calling the "closing argument."

"Now, in the closing days of this campaign, my opponent is trying to distance himself from the President he has faithfully supported 90% of the time. He’s supported four of the five Bush budgets that have taken us from the surpluses of the Clinton years to the largest deficits in history. John McCain has ridden shotgun as George Bush has driven our economy toward a cliff, and now he wants to take the wheel and step on the gas," he said.