As polls tighten, the campaign arrives in McCain's home state

[cnn-photo-caption image= http://i2.cdn.turner.com/cnn/2008/images/10/30/art.mccain30.gi.jpg caption="McCain’s campaign is spending to reach voters in his home state of Arizona."](CNN) - Democrats are making a late play for Arizona as new polls show home-state Senator John McCain with a shrinking single-digit edge over Barack Obama.

A CNN/Time/Opinion Research Corporation poll released this week suggested McCain holds a 53 percent to 46 percent advantage. Other new surveys have indicated an even tighter race.

Earlier this week, the McCain campaign and the Republican National Committee paid for negative robo-calls in the state, telling voters Obama’s election “invites a major international crisis he will be unprepared to handle alone.

“If Democrats win full control of government, they will want to give civil rights to terrorists and talk unconditionally to dictators and state sponsors of terror. Barack Obama and his Democratic allies lack the experience and judgment to lead America,” said the calls.

MoveOn.org said Thursday it was launching its ‘Obamacan’ ad statewide on broadcast and cable in response. The ad features a life-long Republican who supports Obama.

END_OF_DOCUMENT_TOKEN_TO_BE_REPLACED

(CNN) - After a string of surveys that seemed to indicate John McCain was reducing Barack Obama's polling edge, the most recent numbers added to the latest CNN poll of polls suggest the Democratic nominee is holding on to his advantage nationally. 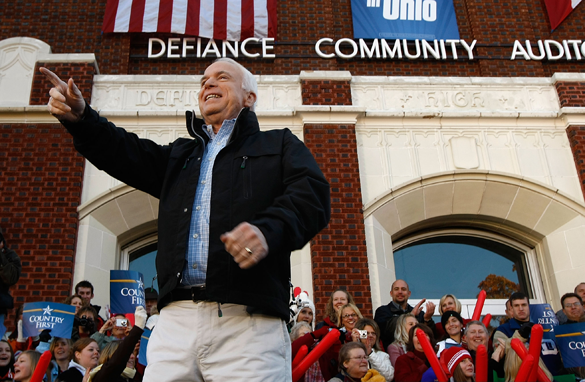 McCain may be closing the gap, a new CNN poll of polls shows. (Getty Images)

(CNN) - With five days until Election Day, there are signs the presidential race may be tightening, according to a new CNN poll of polls.

According to an average of several recent surveys, Barack Obama's lead over John McCain is down to 5 points nationwide, 49-44 percent - a gap that is 3 points less than it was earlier this week, and nearly half what the margin was one week ago.

The closing of polls late in a presidential race is not unusual: Sen. John Kerry lost his 2004 White House bid despite holding a slim lead over President Bush in its final days and then-Vice President Al Gore trailed Bush by 5 points in early November before the two essentially split the vote days later.

“It’s possible that McCain will continue to close the gap over the final few days of the campaign,” said CNN Senior Political Researcher Alan Silverleib. “Presidential elections often tighten up at the end, especially if there’s not an incumbent on the ballot. Voters sometimes experience a degree of ‘buyer’s remorse’ before settling on a new president."

Historically, however, only one presidential candidate in modern history has come back from the deficit McCain faces to win an election - Ronald Reagan in 1980.

Related: Is it too late for McCain to close the gap?

Max Lohrey of La Junta in Otero County, Colorado called CNN’s voter hotline concerned that a missing absentee ballot might have “fallen into the hands of the wrong people . . . is this going to be used for fraud?”

Chawnte Williams, is registered to vote in the Denver area but is currently out of state.  Williams reports that she requested an absentee ballot earlier this month and was informed that it would not arrive until the end of October because of printing problems. When the ballot did not arrive as scheduled, she called to check on it again, and was told by her local election officials that they had no record of her requesting an absentee ballot.

“So because of somebody’s clerical error, now it looks like I might not be able to vote,” Williams said on the hotline.  "I feel like I'm not going to be able to vote and there's no reason why," Williams also told CNN in a telephone interview Thursday.

END_OF_DOCUMENT_TOKEN_TO_BE_REPLACED

In consecutive campaign events in Erie, Pennsylvania, Palin argued that economic concerns are inexorably entwined with American security interests, and that John McCain is the only candidate prepared to handle both issues.

“Gone are the days when we had placed domestic and foreign concerns in two distinct categories and just choose a president according to the priorities of the moment,” Palin said at a rally in Erie. “On November 4, we need to elect a president who can handle the difficulties in the economy and the dangers of the world all at the same time.”

The Republican vice presidential nominee was introduced by former Pennsylvania Gov. Tom Ridge, an Erie native with national security experience whom McCain once considered tapping as his running mate.

END_OF_DOCUMENT_TOKEN_TO_BE_REPLACED

Touch-screen machines can occasionally fail or register votes for unintended candidates. Optical-scan systems can have trouble reading paper ballots that are too long or marked with the wrong ink. At least one study suggests that electronic voting machines can be easily hacked.

And some 9 million voters, including many in the battleground states of Ohio and Florida, will use equipment that has changed since March, increasing concerns about errors next Tuesday.

"You can be almost certain that there will be irregularities in some places around the country," said Rep. Rush Holt, D-New Jersey. "The problem now is that roughly a third of voters nationwide will use unverifiable electronic machines. So if there are uncertainties, there will be no way to resolve them."

With early voting under way in 31 states, these problems have already surfaced. In recent weeks, voters in West Virginia, Colorado, Tennessee and Texas have reported that touch-screen machines registered their votes, at least initially, for the wrong candidate or party.

The Statement
The campaign of Democratic presidential candidate Sen. Barack Obama, on Wednesday, October 29, responded to Republican opponent Sen. John McCain criticism of Obama's relationship with Rashid Khalidi, an Arab studies professor at Columbia University, by suggesting that McCain also had a link to Khalidi. It said, "John McCain should answer why, under his own chairmanship, the International Republican Institute repeatedly funded an organization Khalidi founded, the Center for Palestine Research and Studies, over the course of many years."

END_OF_DOCUMENT_TOKEN_TO_BE_REPLACED

According to preliminary ratings numbers from the networks, more than 26 million people watched the program on CBS, NBC or Fox. That's 3 million more than usually watch those networks at that hour, according to the Hollywood Reporter. Averaging in the cable networks that also carried the event, about 30 million people in all saw the long-form campaign ad.

The ad was most watched on NBC, where nearly 10 million viewers tuned in. More than 8.5 million watched on CBS while just under 8 million viewed the program on Fox. On average, about 7 million people usually tune into each network at that hour.

Overall, according to Nielsen, for the six networks that aired the infomercial simultaneously, it scored a household rating of nearly 22 percent - meaning 22 percent of all households watching television at that hour tuned into the spot. That compares to the 38.3 household rating the last presidential debate scored.

But even if viewers didn't catch the spot when it first aired, clips of the program have repeatedly been broadcast across the cable news chanels Thursday, maximizing the Illinois senator's exposure in the crucial remaining days before Election Day.

"The strategic brilliance of this for Obama is that he is going to consume about 24 hours of the news cycle," Evan Tracey of Campaign Media Analysis Group said. "It boxes [John] McCain in, takes the oxygen out of the room."

It's unclear exactly how much the Obama campaign spent on the commercial in total, but estimates put the cost at least $3.5 million.

Red Mississippi could go for blue in Senate race

But with an unpopular president, a broken economy and an African-American at the top of the Democratic ticket, the prospect is high for Democrats to pick up in November.

Related: 'Perfect storm' could give Dems 'magic 60' in Senate

Mississippi has not sent a Democrat to the U.S. Senate in 26 years and has voted Republican in eight of the last nine presidential elections.

In 2000 and 2004, the state overwhelmingly supported George W. Bush by a nearly 60 percent margin.

Despite some polling showing Republican Sen. Roger Wicker with a comfortable lead over former Democratic Gov. Ronnie Musgrove, both campaigns agree the race is going to come down to every last vote.

Less than 140 hours until election day when Americans will rush to the polls in what is expected to be record numbers to decide the direction of their country for the next four years.

Never has more money been spent by candidates for president to try to convince you they are the answer to America’s problems. And yet after almost two years of campaigning, it is estimated that somewhere around seven percent of Americans still have not decided whether they want John McCain or Barack Obama to run things.

The differences between the two men are as pronounced as between any two candidates for the nation’s highest office in a very long time.