Biden: Never thought I'd see this from McCain

[cnn-photo-caption image= http://i2.cdn.turner.com/cnn/2008/images/11/01/art.joereddress1101.ap.jpg caption="Sen. Biden took a shot at Sen. McCain during a campaign stop in Indiana Saturday."]
EVANSVILLE, Indiana (CNN) – The morning after Joe Biden told reporters he hoped John McCain would finish the campaign with a positive tone - “his strength” - the Delaware senator said he doesn’t remember a presidential campaign ending so viciously.

“In my view, over the last few weeks, John McCain’s campaign has gone way over the top,” said Biden Saturday at an outdoor rally on Evansville’s Main Street. “They are trying to take the low road to the highest office in the land. It’s not only George Bush’s economic policies that John McCain has bought hook, line and sinker. He’s also bought Karl Rove’s brand of political tactics.”

“It is disappointing, I never thought I’d see this from a McCain campaign,” Biden continued. “They’re calling Barack Obama every name in the book. They are going out in a way that I don’t recall it being more personally vicious.”

As a supporter yelled, “They’re scared!” the Delaware senator predicted that the tone would get worse in the last three days.

END_OF_DOCUMENT_TOKEN_TO_BE_REPLACED

McCain's name nowhere to be seen at Palin rally

[cnn-photo-caption image= http://i2.cdn.turner.com/cnn/2008/images/11/01/art.sign2.cnn.jpg caption=" Palin signs made an appearance at a Florida rally – McCain signs did not."] POLK CITY, Florida (CNN) - At a boisterous Sarah Palin rally in Polk City, Florida on Saturday afternoon, one name was surprisingly absent from the campaign décor - John McCain’s.

Looking around the Fantasy of Flight aircraft hangar where the rally took place, one could see all the usual reminders that it was a pro-McCain event. There were two large “Country First” banners hung on the walls along with four enormous American flags meant to conjure the campaign’s underlying patriotic theme. Many of the men and women in the audience wore McCain hats and t-shirts.

But on closer inspection, the GOP nominee’s name was literally nowhere to be found on any of the official campaign signage distributed to supporters at the event.

Members of the audience proudly waved “Country First” placards as Palin delivered her stump speech. Those signs were paid for by the Republican National Committee.

The other sign handed out to supporters read “Florida is Palin Country,” but those signs were neither paid for by the Republican National Committee nor the McCain campaign. In small print, the signs were stamped with the line “Paid for and authorized by Putnam for Congress" - as in, the re-election campaign of Florida congressman Adam Putnam, whose district skirts Polk City.

In fact, Putnam’s name was considerably more prominent than was McCain’s - his campaign had placed a number of large “Putnam for Congress” banners around the event site.

Lawmaker wants to know source of leak on Obama's aunt

[cnn-photo-caption image= http://i2.cdn.turner.com/cnn/2008/images/11/01/art.conyers.gi.jpg caption=" Conyers called for an investigation into the leak over Obama’s aunt."]WASHINGTON (CNN) - A Democratic lawmaker on Saturday asked Homeland Security Secretary Michael Chertoff to investigate a leak to reporters regarding the immigration status of Democratic presidential candidate Barack Obama's aunt, suggesting the Bush administration may have been behind it.

"I was startled to read in today's Associated Press that a 'federal law enforcement official' has leaked information about an immigration case involving a relative of Senator Obama," said a letter sent to Chertoff by Rep. John Conyers, D-Michigan, who chairs the House Judiciary Committee.

"Even more troubling, the AP reports that it 'could not establish whether anyone at a political level in the Bush administration or in the McCain campaign had been involved,' a very disturbing (suggestion) indeed," the letter said.

END_OF_DOCUMENT_TOKEN_TO_BE_REPLACED

Obama's aunt may be illegal immigrant

[cnn-photo-caption image= http://i2.cdn.turner.com/cnn/2008/images/11/01/art.bokenya.gi.jpg caption="Sen. Obama visited Kenya, his father's birthplace, in 2006. The Associated Press has reported that a paternal aunt of Obama's is living in the U.S. illegally."]
(CNN) - A member of Barack Obama's Kenyan family living in the United States is facing a possible immigration issue: the Associated Press reports that an aunt he speaks about in his memoirs is living in the United States illegally.

The AP says she remain in government housing in Boston, even though an immigration judge denied her request for asylum four years ago.

Zeituni Onyango's refusal to leave the country would be an administrative violation, not a criminal matter.

CNN has not been able to independently verify her immigration status.

The Obama campaign has not yet responded to a CNN request for comment.

Obama called the woman "Aunt Zeituni" in his memoirs, where he described her as the first Kenyan relative he encountered on his visit to his father's home country.

Onyango has donated at least five times to Obama's campaign in July and September, listing her occupation as a "volunteer resident health advocate." Federal campaign finance records indicate several contributions in amounts of $5 and $25.

Updated 11:37 a.m.: Bill Burton, a spokesman for the Obama campaign, issued the following statement in response to the AP's reporting about Sen. Obama's aunt: "Senator Obama has no knowledge of her status but obviously believes that any and all appropriate laws be followed. "

[cnn-photo-caption image= http://i2.cdn.turner.com/cnn/2008/images/11/01/art.bosmile1101.gi.jpg caption="Sen. Obama has an advantage over Sen. McCain in 4 of the 5 CNN's latest state polls of polls."]
(CNN) – It's down to the wire for Sens. Barack Obama and John McCain as
the two men enter their final weekend of campaigning. With just three days until Election Day, CNN's latest polls of polls shows Obama holding on to leads in a few key battlegrounds — and neck-and-neck with McCain in others.

Obama is also ahead in Wisconsin, where CNN's latest poll of polls in the state gives him an 11 point lead: Fifty-three percent of voters in Wisconsin support the Illinois senator and 42 percent support the Arizona senator. Five percent of voters in the state are unsure about their choice for president. In CNN's October 30 Wisconsin poll of polls, Obama was ahead by 12 points - 53 percent to 41 percent.

Obama holds the slimmest of advantages in Montana in CNN's first poll of polls for the state: Forty-six percent of likely voters in the state back Obama, and 45 percent support McCain. Nine percent of Montana's likely voters are unsure about their choice for president.

END_OF_DOCUMENT_TOKEN_TO_BE_REPLACED

Both candidates are hoping to reap the lion's share of more than 23 million votes that have been cast nationwide. They're targeting states where polls remain open through the weekend - and, in some cases, into Monday.

Calculations by CNN and other news organizations indicate that many, if not most, of the early votes in more than 30 states are being cast by registered Democrats, although it's unknown who voted for which candidate.

"It would surprise me, but Republican voters in early voting states may simply be holding their ballots," Paul Gronke of the Early Voting Information Center said Friday. "But I wouldn't be surprised to see the Republican race start to catch up a little bit." See where people are voting early

Greene: The cheers that won’t be heard 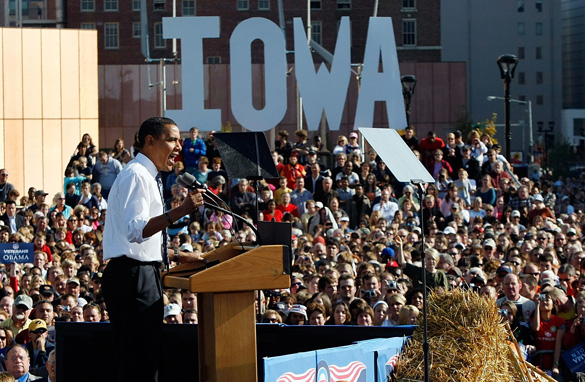 MITCHELLVILLE, Iowa (CNN)– The echoes are still sounding, even though we’re on our way to the next city, and toward Election Day.

“Next Tuesday, voters will say no to the McCain-Palin campaign of fear and smear,” Tom Harkin, Democratic senator from Iowa, was saying to a cheering crowd in downtown Des Moines.

It wasn’t the fear-and-smear insult to John McCain and Sarah Palin that stood out; McCain and Palin were, somewhere in America, being just as insulting to Barack Obama and Joe Biden on this day.

No, what stood out was the “next Tuesday.” Suddenly, the candidates and those who speak on their behalf no longer have to say “in November” when referring to the election. Now it’s down to a single day of the week: Tuesday.

There were, in the Des Moines public park, those twin contemporary hallmarks of presidential campaign rallies: enormous American flags held temporarily aloft by the gigantic orange steel arms of SkyTrak forklifts, and armed men wearing black on surrounding rooftops. Patriotism and firepower, as omnipresent as confetti and brass bands once were.

And the helicopters. Always the security helicopters, buzzing over the crowd.

The word I O W A, just like that, in big, white, blocky welcome-to-the-state-fair style letters with spaces in between each one, greeted the arriving members of the audience, many of whom were walking up Locust Street on a warm and gorgeous autumn day. I had walked with some of them, crossing a bridge that spanned the Des Moines River, and that Bruce Springsteen song that has become as identified with Obama rallies as his campaign button or his photo on posters sounded over the loudspeaker system, indicating that he would soon be present.

END_OF_DOCUMENT_TOKEN_TO_BE_REPLACED

[cnn-photo-caption image= http://i2.cdn.turner.com/cnn/2008/POLITICS/11/01/campaign.wrap/art.mccain.sat.ap.jpg caption="With his wife, Cindy, behind him, Sen. John McCain waves to the crowd Saturday in Newport News, Virginia."]
(CNN) - The presidential campaigns are pushing for votes in key battleground states Saturday as the race for the White House enters its final weekend.

Republican nominee Sen. John McCain, trying to make up a deficit in many polls, appeared at a rally Saturday morning in Newport News, Virginia, a formerly reliable Republican state that has become a toss-up.

McCain told the crowd that his Democratic opponent, Sen. Barack Obama would try to raise taxes as president.

McCain is due later in Springfield, Virginia, and Perkasie, Pennsylvania, before heading to New York City for a scheduled appearance on "Saturday Night Live."

Obama will start his day with a morning rally in Henderson, Nevada, before moving on to Pueblo, Colorado, and a late-night rally in Springfield, Missouri.

Biden denies 'muzzling,' unsure if he and McCain are still friends

[cnn-photo-caption image= http://i2.cdn.turner.com/cnn/2008/images/10/24/art.bidencrisis.ap.jpg caption="Biden invited questions from traveling reporters for the first time in weeks."]LIMA, Ohio (CNN) – Joe Biden invited questions from his traveling press corps for the first time in almost eight weeks on Friday night, rejecting reports that the campaign has muzzled his famous talkative behavior and saying he hopes that he and John McCain will still be friends after this contentious election is over.

“I don’t know, I hope [the friendship] is intact, John and I have not had a chance to speak,” Biden said, standing in a burger joint with his wife and one of his granddaughters. “I hope [it’s] intact because I still admire him, I still like him.”

“We have strong, strong, fundamental disagreements on policy, and we have our whole political life together. I mean, we've been arguing about everything from Amtrak to Afghanistan for, you know, as long as we've been together,” he continued. “I believe when this is over, win or lose, John and I are likely to be around in one form or another, in one job or another, and I hope, my hope is we can work together.”