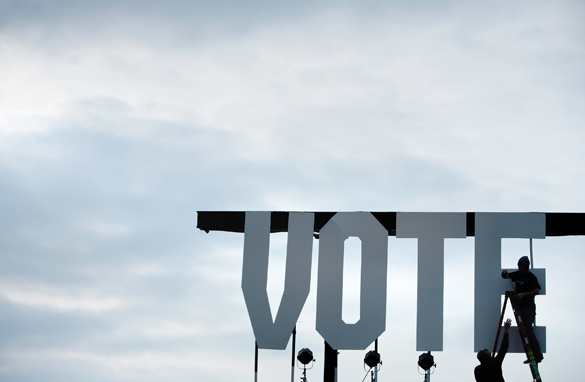 Dr. Cathy Baldwin-Johnson, who had been Palin's physician at the Mat-Su Regional Medical Center since 1997, also said the Alaska governor had had a 1992 biopsy for a breast lesion that was found to be benign. She said Palin was on no routine prescription medications, with no known drug allergies, but that no screening tests for heart disease had been performed because those tests were not routine for “young healthy women with no risk factors.”

"Governor Palin is in excellent health and has no known health problems that would interfere with her ability to carry out the duties and obligation of Vice President of the United States of America," said Baldwin-Johnson in the November 3 letter.

Two weeks ago, Palin’s campaign said a summary of the governor’s medical history would be made public before Election Day, though they gave no precise timeframe for the release.

John McCain, Barack Obama and Joseph Biden have all provided details about their medical history. 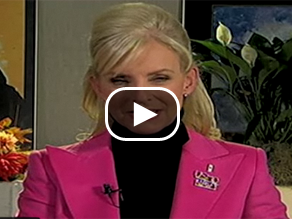 END_OF_DOCUMENT_TOKEN_TO_BE_REPLACED

(CNN) - In the waning hours of the presidential race, the toughest shot against Barack Obama may not have come from the Republican ticket, but from country music star Hank Williams, Jr.

The country-rocker, a campaign trail fixture who has penned a special song for the GOP ticket called "McCain-Palin Tradition," suggested Monday Obama doesn't like the national anthem.

“You know, I’m usually at Monday Night Football tonight, but Colorado, this is a lot more important tonight. Join me now in our national — you know, that song that, uh, Mr. Obama’s not real crazy about, we’re singing it right now," he said before performing his version of the song.

After playing both songs, Palin thanked Williams, Jr. for his help on the campaign trail, and did not acknowledge the national anthem remark.

The comments appear to reference a long-debunked e-mail rumor that Barack Obama refuses to put his hand on his heart when the national anthem is played. That e-mail stems from a 2007 photograph showing the Illinois senator with his hands by his side during a performance of the song.

The e-mail also stated Obama said the national anthem is a "war-like message" and should be swapped for a tune like "I'd Like to Teach the World to Sing."

Obama, in fact, has never said those things.

(CNN) – On the eve of Election Day, amid overwhelming public interest in the presidential race, some voters are being confronted with a sea of election-related misinformation.

That information is incorrect. The Ohio Secretary of State’s Web site is clear: Everyone in Ohio votes Tuesday, November 4.

Laura Jordan of the Montgomery County, Ohio Board of Elections, says she has not received reports of any calls like the one Robinson received. But Jordan also tells CNN that she has received reports of misleading automated calls giving voters incorrect information about the location of their polling places. Voters who call the county board reporting these types of calls are told the correct location for their polling place, according to Jordan.

If you live in Ohio, click here for voter information from the Ohio Secretary of State’s Web site.

ANCHORAGE, Alaska (CNN) - Alaska's Personnel Board concluded Monday that Republican vice presidential candidate Sarah Palin did not violate ethics law by trying to get her ex-brother-in-law fired from the state police, contradicting an earlier investigation's findings.

"There is no probable cause to believe that the governor, or any other state official, violated the Alaska Executive Ethics Act in connection with these matters," Timothy Petumenos, the Anchorage lawyer hired to conduct the probe, wrote in his final report.

The announcement comes a day before Palin and Republican presidential nominee John McCain face voters in Tuesday's presidential election. Allegations that she fired Public Safety Commissioner Walt Monegan because he refused to sack her ex-brother-in-law from the state police force have dogged her since before she became McCain's running mate in August.

An earlier probe launched by the state Legislature concluded that Palin unlawfully abused her power by trying to get her sister's ex-husband fired from the state police force. That inquiry concluded that her firing of Monegan stemmed in part from his refusal to get rid of her former relative, but was within her authority as governor.

First town weighs in at midnight

[cnn-photo-caption image= http://i2.cdn.turner.com/cnn/2008/images/11/03/art.dixville.ap.jpg caption="Dixville Notch residents are the first to weigh in."](CNN) - The first wave of election returns won't flow in until 7 p.m. ET Tuesday night, but the results in one precinct will be known much sooner.

Dixville Notch, an isolated village located in New Hampshire's northeast corner, will begin voting at the stroke of 12 a.m. Tuesday, and the ballots won't take long to tally: Dixville Notch only has about 20 registered voters.

The town, home to around 75 residents, has opened its polls shortly after midnight each election day since 1960, drawing national media attention for being the first place in the country to make its presidential preferences known - although since 1996, another small New Hampshire town, Hart's Location,reinstated its practice from the 1940s and also opens its polls at midnight.

But the result in Dixville Notch is hardly a reliable bellwether for the eventual winner of the White House or even the result statewide. Though New Hampshire is a perennial swing state, Dixville Notch consistently leans Republican - the last Democrat it picked was Hubert Humphrey over Richard Nixon in 1968.

But the result could be close this year given Democrats now outnumber Republicans there. According to Donna Kaye Erwin, the supervisor of the voter checklist, Dixville Notch has five registered Democrats, four Republicans, and 11 undeclared voters.

The result could also be a nail biter given the town picked both John McCain and Barack Obama for the New Hampshire Democratic and Republican primaries last January. McCain ultimately won the state of New Hampshire, while Hillary Clinton upset Obama there.

[cnn-photo-caption image= http://i2.cdn.turner.com/cnn/2008/images/11/03/art.va.ap.jpg caption="Officials from the Virginia State Board of Elections said a computer glitch gave people the wrong information."](CNN) – Sometimes what seems like a political “dirty trick” is just a simple mistake.

The Virginia State of Board Elections issued a “Rumor Buster” press release Monday in response to reports of misleading robo-calls from multiple locations across the state.

But it turns out that the misinformation was just an accident caused by a computer glitch. “The technology, God bless technology, was incorrectly giving people their polling precincts,” Jean Cunningham, chair of the Virginia State Board of Elections, told CNN Monday. “Highly sophisticated software that went amok.”

Cunningham also told CNN that, in addition to the “Rumor Buster,” corrective phone calls were being made to everyone who received one of the incorrect automated calls.

If you live in Virginia, click here to search for your polling place on the state board’s Web site.

Scenes from the Trail: Cake for Biden's embeds and staff 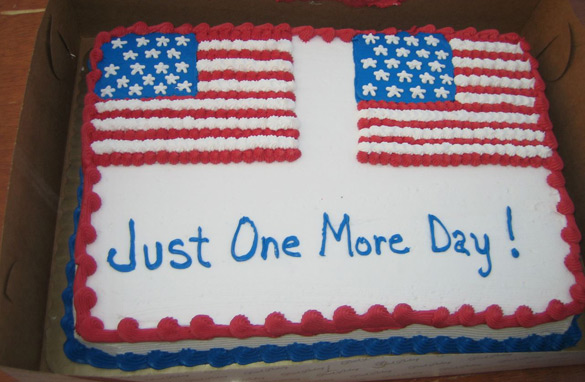 A cake awaiting weary reporters and staff at Joe Biden's Zanesville, Ohio rally, his second of four on Monday.(CNN/Alexander Marquardt)

[cnn-photo-caption image= http://i2.cdn.turner.com/cnn/2008/images/11/03/art.radiohost.ap.jpg caption="Voters waited in long lines to vote early in Florida."](CNN) – In the final hours before Election Day, callers to CNN’s Voter Hotline are reporting misinformation that is circulating in some of the battleground states, including some that were intended as jokes.

David Ashley, of Florida, called to report hearing incorrect information broadcast Monday morning on local radio in the Ocala/Gainesville area. After a call into WSKY’s morning show about many Florida residents complaining of not being able to vote early due to long lines, a host on the station’s morning show said “that [Florida Gov.] Charlie Crist had decided because of the voter polling crowds to open the polls on Wednesday for Obama supporters to vote,” Ashley said in his hotline call.

When CNN contacted Ashley, she said that the morning hosts on WSKY often use sarcasm during their program. But, Ashley was concerned that the statement sounded factual, and that less informed listeners might not have realized the statement was incorrect about the date for Election Day.

In response to CNN’s inquiry about Ashley’s call, WSKY allowed CNN to listen to a recording of Monday morning’s broadcast. While the host did state that Florida Gov. Charlie Crist had decided to open polls on Wednesday, November 5 to accommodate supporters of Sen. Barack Obama, subsequent remarks by the two hosts make it clear that the statement was intended as a joke. WSKY would not comment any further.

Tuesday, November 4, is the date for voting in this year’s general election, according to information available from the Florida Division of Elections.

If you live in Florida, click here to go to the Web site for the Florida Division of Elections.