Rosen: An election about Big Things

This election has been about Big Things. Our country needs healthcare reform, an energy policy, middle-class tax cuts, responsible fiscal regulation and an exit from a costly and ill-focused war. How are we going to get there?

The House of Representatives has a good working majority to support President Barack Obama. Most analysts are focusing on the number 60 as the number of Democratic seats that would be needed in the Senate to determine whether President Obama will be able to pass his agenda through Congress.

In short, can we assure Americans that the change they have voted for will actually come to pass?

END_OF_DOCUMENT_TOKEN_TO_BE_REPLACED

NEW YORK (CNN) - The New York House seat in District 13 was the last Republican seat in New York City. It will switch into the Democratic column.

Democrat Mike McMahon, a lawyer and City Council member for the past eight years, has defeated Republican Robert Straniere.

The race is to replace Republican Congressman Vito Fossella. In May, he was pulled over in Alexandria, Virginia, and accused of drunken driving. Fossella later admitted having an affair and fathering a child out of wedlock.

Amid the scandal, Fossella decided against seeking re-election.

Wicker, a former seven-term congressman who was appointed to the seat, defeated former Gov. Ronnie Musgrove, a Democrat.

CNN projections are based on actual results and exit poll data from key areas.

“Today, Americans spoke loud and clear and demanded change by electing Barack Obama as our next President. They understood his vision of a fairer and more just America and embraced it. They heard his call for a new generation of Americans to participate in government and were inspired. They believed that change is possible and voted to be part of America’s future.

“Barack Obama is my friend and tonight, I’m very proud to call him my President. I look forward to working with him and Joe Biden on the many challenges facing our country here at home and around the world.”

Former Senate Majority Leader Trent Lott's appointed successor had faced a tough fight from former Democratic Gov. Ronnie Musgrove. Party identification is not included on the ballot in Mississippi, so a projected surge in African-American and Democratic voters was not expected to have the same impact as it did elsewhere.

[cnn-photo-caption image=
http://i2.cdn.turner.com/cnn/2008/images/11/05/art.landrieu.2.jpg caption=" Sen. Mary Landrieu (D-LA)."]
(CNN) - CNN is projecting that incumbent Mary Landrieu has won re-election in Louisiana.
Landrieu held a dubious distinction this cycle as the only Democratic senator to face a real re-election threat. The two-term senator - whose two victories have been won by razor-thin margins - faced her toughest opponent yet in state Treasurer John Kennedy.
The Democrat-turned-Republican had the support of Louisiana's popular GOP governor, Bobby Jindal, in a state that strongly supported John McCain.
Republicans had poured hundreds of thousand of dollars into ad buys in the state, pointing to last-minute poll numbers that suggested the race was tightening. But the cash-rich Democratic Senatorial Campaign Committee spent even more, and Landrieu entered Tuesday a heavy favorite.

Clinton: Americans 'refused to be invisible'

Tonight, we are celebrating an historic victory for the American people. This was a long and hard fought campaign but the result was well worth the wait.

Together, under the leadership of President Barack Obama, Vice President Joe Biden, and a Democratic Congress, we will chart a better course to build a new economy and rebuild our leadership in the world. And I look forward to doing all that I can to support President Obama and Vice President Biden in the difficult work that lies ahead.

For too long, middle class families in this country have felt invisible, struggling alone as wages stagnate, jobs disappear, and the costs of daily life climb upward. In quiet, solitary acts of citizenship, American voters gave voice to their hopes and their values, voted for change, and refused to be invisible any longer.

"Tonight we elected a President who has inspired a majority of Americans with his vision and policies, a man who is principally a leader for these times who happens to also be African American; and because of America’s stunning ability to move on and transform, to write a new chapter of our history, Barack Obama will be President during the 50th anniversary of the Civil Rights movement and the 150th anniversary of the Civil War.

"Tonight there are tears of joy and disbelief in small rural communities and inner cities, where for too long, some weren’t sure anything was really possible for them.

"Tonight new dreams are born and old truths are affirmed. Tonight we enter a new America, the best America, the America of our highest hopes." 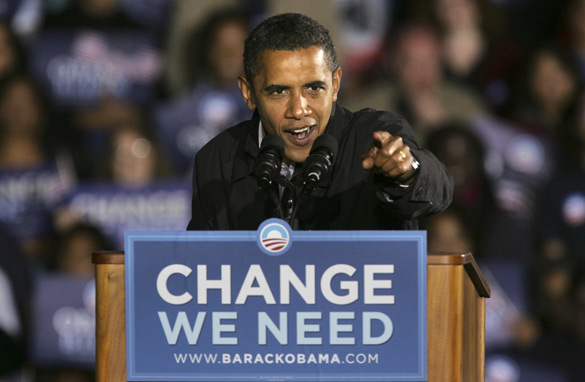 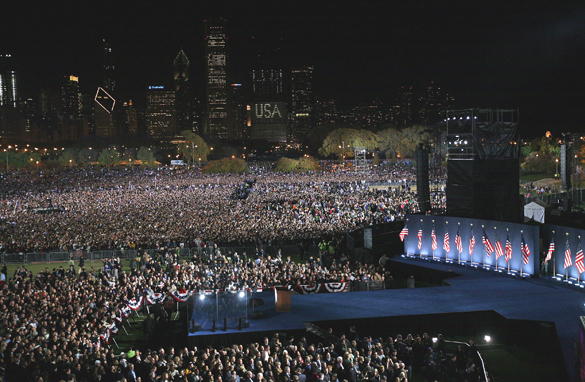