One of the aides tells CNN that campaign manager Rick Davis fired Scheunemann after determining that he had been in direct contact with journalists spreading "disinformation" about campaign aides, including Nicolle Wallace and other officials. (Update: Davis denies the claim.)

Update: Scheunemann disputes campaign sources, says he was not fired

"He was positioning himself with Palin at the expense of John McCain's campaign message," said one of the aides.

Senior campaign officials blame Schuenemann specifically for stories about the way Wallace and chief campaign strategist Steve Schmidt mishandled Palin's rollout - stories that the campaign says threw them off message in the critical final weeks of the campaign.

Another aide said McCain personally was "very disappointed by Randy," who worked for McCain for many years in the Senate.

Scheunemann became close with Palin during her debate prep process.

[cnn-photo-caption image= http://i2.cdn.turner.com/cnn/2008/images/11/05/art.waxman1105.gi.jpg caption="Rep. Henry Waxman wants to be the next Chairman of the House Energy and Commerce committee."]
WASHINGTON (CNN) - Just hours after Democrats celebrated an expanded majority in the House of Representatives, a public fight erupted for the leadership of a key committee charged with enacting many of President-elect Barack Obama's agenda items.

In a written statement released Wednesday Waxman, who is the next senior Democrat on the committee, said: "When the new Congress starts in January, we will face unprecedented opportunities and challenges. The public expects Congress and President-elect Obama to work together to find solutions to the nation's most pressing problems. But the issues we will confront are immensely difficult. We will need the very best leadership in Congress and our committees
to succeed."

Waxman's statement also focused on the most controversial issues the committee will face, making the case he could get these measures passed.

"Enacting comprehensive energy, climate, and health care reform will not be easy. But my record shows that I have the skill and ability to build consensus and deliver legislation that improves the lives of all Americans."

Waxman called Dingell this morning to tell him that he would be running for committee chairman. Dingell did not expect a challenge to the post. Since he got the news, Dingell has been calling Democrats on his committee and asking for their support.

END_OF_DOCUMENT_TOKEN_TO_BE_REPLACED

Praying with the President-elect

[cnn-photo-caption image= http://i2.cdn.turner.com/cnn/2008/images/11/05/art.bolook1105.gi.jpg caption="Before stepping on stage Tuesday night to address his supporters; the nation; and to a certain extent, the world, Sen. Barack Obama took a moment to pray with a conservative evangelical pastor."]
(CNN) - Before he delivered his victory speech on Tuesday night in Chicago, President-elect Barack Obama took a call and bowed his head in prayer. Dr. Joel Hunter, pastor of Northland Church in Orlando, Florida and Otis Moss Jr. from Mount Olivet Institutional Baptist Church in Cleveland, Ohio joined him in that prayer.

Speaking with CNN today by phone, Dr. Hunter says the prayer was intensely personal and private but did say “I prayed for his family and for him and for the country. I had no agenda other than trying to create an environment in which he felt the presence and could receive wisdom from God.” Dr. Hunter, a conservative evangelical who delivered a prayer at the Democratic National Convention this summer, says the President-elect “…feels the weight of this responsibility. He [Obama] doesn’t take upon himself of having to have all the answers but he certainly realizes the huge challenges this nation faces. He feels the personal weight of the potential to guide us through these difficult times. I don’t think he’s oppressed by it though.” Dr. Hunter says he thinks it set in for Obama last night and led to the sober tone of the victory speech.

END_OF_DOCUMENT_TOKEN_TO_BE_REPLACED

A look back at the campaign 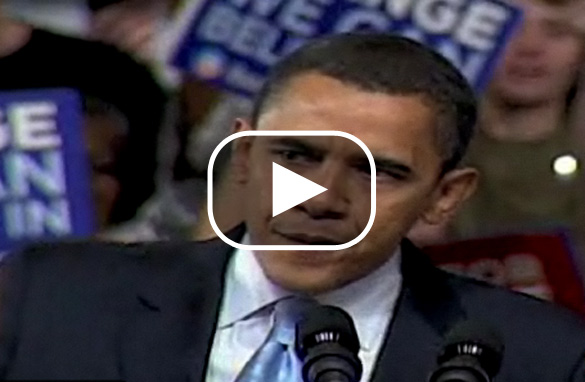 (CNN) - Watch this retrospective on the nearly two-year presidential campaign that resulted in Sen. Barack Obama becoming the first African-American nominee of a major political party and, then, the nation's first black president-elect.

Full announcement after the jump

END_OF_DOCUMENT_TOKEN_TO_BE_REPLACED

Obama has choices for excess cash

[cnn-photo-caption image= http://i2.cdn.turner.com/cnn/2008/images/11/05/art.pres.obama.ap.jpg caption="There are strict federal guidelines on how unspent campaign funds may be used after the polls have closed."]

(CNN) - So you’ve just finished a hard-fought campaign for federal office, and after paying off campaign expenses and debts, you find yourself with a tidy surplus of funds left over in your campaign coffers. What’s a candidate to do?

The campaign may be over, but there are strict federal guidelines on how unspent campaign funds may be used after the polls have closed and all the votes have been counted. Win or lose, candidates have a number of options available to them on how to dispose of any remaining funds in their campaign kitties, but not surprisingly, “personal use” is not one of the options.

Candidates with leftover funds may do any or all of the following:

END_OF_DOCUMENT_TOKEN_TO_BE_REPLACED

The military said it is sending home two brigades and not replacing one of them this month, dropping the number of brigades in Iraq from 15 to 14. A brigade has about 3,000 troops.

The 2nd Brigade of the 101st Airborne Division was scheduled to leave Iraq in February 2009, but a late November departure will cut short by two months its 15-month tour.

The second unit, the 3rd Brigade of the 101st, is scheduled to leave this month and will not be replaced, according to Pentagon officials.

Army officials said that several other units will be returning early because of positive security situations on the ground in Iraq. However, current plans are to eventually replace those units, they said.

Early departures and not replacing forces could be the start of a trend that could allow President-elect Barack Obama to fulfill his campaign pledge to reduce the number of combat brigades in Iraq by roughly one a month in his first 16 months in office.

[cnn-photo-caption image= http://i.l.cnn.net/cnn/2008/images/01/23/art.cepd.cnn.jpg caption="CNN=Politics Daily is The Best Political Podcast from The Best Political Team."]
(CNN)–After 21 months on the campaign trail, Illinois senator Barack Obama is the nation’s first African-American president-elect. In the latest installment of CNN=Politics Daily, voters across the country react to this historic development. CNN’s Suzanne Malveaux reports on Obama’s history-making candidacy and his transition to commander-in-chief.

What’s the formula for a successful presidential run? CNN’s Tom Foreman has the answer. Watch him report on the details of Obama’s meteoric rise to political power.

Also: Not all citizens of the world are celebrating Barack Obama’s historic achievement. CNN’s Zain Verjee takes a look at how various countries are reacting to the election of the Democratic senator.

Finally: John McCain has no regrets. And after a crushing defeat, the Arizona senator pledges to help his former rival tackle the nation’s problems. CNN’s Ed Henry breaks down McCain’s concession speech.

(CNN) –– Hours after John McCain and Sarah Palin conceded defeat to Barack Obama, the Alaska governor told CNN she can't imagine running for the top job herself in 2012.

"Right now I cannot even imagine running for national office in 2012," she told CNN's Dana Bash. "When I say that, of course, coming on the heels of an outcome that I did not anticipate and had not hoped for. But this being a chapter now that is closed and realizing that it is a time to unite and all Americans need to get together and help with this new administration being ushered in."

Bash caught up with Palin and her husband Todd in the Phoenix Biltmore - the site of John McCain's concession speech Tuesday night.

"2012 sounds so far off that can't even imagine what I'd be doing then," Palin also said.

"I don't think anybody should give Sarah Palin that much credit, that I would trump an economic time in this nation that occurred about two months ago, that my presence on the ticket would trump the economic crisis that America found itself in a couple of months ago and attribute John McCain's loss to me," she said.

"Now having said that, if I cost John McCain even one vote, I am sorry about that because John McCain, I believe, is the American hero. I had believed it was his time," she added.

Exit polls suggest that voting blocs McCain advisers had hoped Palin would attract - suburban woman and independent voters — strongly supported Barack Obama. Exit polls also suggested over 60 percent of the electorate thought the Alaska governor was unqualified to be president if necessary. But the overwhelming issue among voters did appear to be the nation's economy, not McCain’s vice presidential pick - 85 percent of voters said they were worried about the nation's financial woes, and 54 percent of them picked Obama.

WASHINGTON (CNN) - Fears that terrorists might strike in an effort to influence the U.S. presidential elections never came to pass. But the nation's homeland security chief said Wednesday the country needs to remain vigilant during the presidential transition.

"Any time there's a transition there's a danger or a risk that vulnerability (to terror attacks) will increase because people become distracted. People are leaving; people are coming in - and that's a disruptive process for any organization," Homeland Secretary Michael Chertoff said.

"For that reason, we need to take special pains to make sure that we are very focused on the security of this country from now - in fact, from a month ago or two months ago - through the first half, let's say, of 2009," he said.

Chertoff and others have pointed to terror attacks in Glasgow and Madrid, both of which occurred during transfers of power, as evidence that terrorists time attacks to influence elections

"This is not a statement that there's some imminent threat out there," Chertoff said. "It is a recognition of the human reality that in a changing environment, you have to be extra careful to make sure that you don't lose focus on something like homeland security."

He congratulated President-elect Barack Obama for a "masterly, well-run campaign," and Sen. John McCain, saying McCain's "entire career of public service remains an inspiration to everyone in this country."