[cnn-photo-caption image= http://i2.cdn.turner.com/cnn/2008/images/11/05/art.result.cnn.jpg caption=" The race for the Minnesota Senate is in a dead heat."]
(CNN) - Minnesota Senate challenger Al Franken is not conceding his race against incumbent GOP Sen. Norm Coleman.

The two men are separated by less than 600 votes with 100 percent of the precincts reporting. The Associated Press called the race for Coleman Wednesday morning.

"Under Minnesota state law, we will now enter into an automatic statewide canvass and recount," Franken said earlier Wednesday.

"The process, dictated by our laws, will be orderly, fair, and will take place within a matter of days. We won't know for a little while who won this race, but at the end of the day, we will know that the voice of the electorate was clearly heard."

UPDATE: The AP has uncalled the race for Coleman

END_OF_DOCUMENT_TOKEN_TO_BE_REPLACED

While noting that Republican presidential candidate Sen. John McCain was "gracious" in his defeat, Rice said, "On a personal note, as an African-American, I am especially proud because this is a country that's been through long journey in overcoming wounds, and making race not the factor in our lives.

"That work is not done, but yesterday was obviously an extraordinary step forward."

Palin had been unfamiliar to most Americans, aside from some conservative writers and bloggers, who had admired her since she upended Alaska's Republican establishment by knocking off incumbent Gov. Frank Murkowski in 2006.

That all changed on August 29 - the morning after Sen. Barack Obama's acceptance speech at the Democratic National Convention - when Palin was introduced by McCain.

It wasn't just reporters who were stunned. Even McCain staffers at the event itself were shocked. Many assumed McCain would tap a GOP heavyweight like Mitt Romney or Tim Pawlenty. The most daring option, many thought, would be Joe Lieberman, a former Democrat.

But Palin's debut instantly energized the Republican base, which had long been cool to McCain, and the GOP ticket surged in the polls.

[cnn-photo-caption image= http://i2.cdn.turner.com/cnn/2008/images/11/05/art.bojoepat1105.ap.jpg caption= "President-elect Obama will receive his first daily intelligence briefing Thursday; Vice President-elect Biden will receive also receive a daily briefing as part of the transition of power."]
WASHINGTON (CNN) – President-elect Barack Obama is expected to receive on Thursday his first top secret intelligence briefing similiar to the one provided President Bush each day, according to U.S. officials familiar with the process.

A team of intelligence briefers has been named and is ready to discuss with Sen. Obama the Presidential Daily Brief– the PDB as it is called.

In a message to CIA employees obtained by CNN, CIA Director Michael Hayden said Director of National Intelligence Michael McConnell will lead the first briefing of the newly elected President and has designated senior agency officer Michael Morrell to oversee the PDB process during the transition. The two principal briefers for Obama will be CIA career officers.

Each day, the commander in chief receives the PDB. DNI McConnell and other senior national security officers brief President Bush each morning, six days a week, on the most sensitive information affecting the security of the United States. The President learns about the latest threats and what the nation's spies are doing to help protect the nation.

END_OF_DOCUMENT_TOKEN_TO_BE_REPLACED

"During this time of transition, I will keep the president-elect fully informed on important decisions," Bush said, speaking in a brief address in the Rose Garden. He did not take questions.

He said he had spoken to Obama and congratulated him and Vice President-elect Joe Biden. Bush said he had also called Obama's opponent, Sen. John McCain.

"I congratulated him on a determined campaign that he and Gov. (Sarah) Palin ran," the president said.

END_OF_DOCUMENT_TOKEN_TO_BE_REPLACED

[cnn-photo-caption image= http://i2.cdn.turner.com/cnn/2008/images/11/05/art.putnam1105.gi.jpg caption="Rep. Adam Putnam, flanked in this file photo by Rep. John Boehner on the left and Rep. Roy Blunt on the right, has said he is leaving his congressional leadership position."]

(CNN) – Florida Rep. Adam Putnam, the Chairman of the Republican House Conference, will not seek to retain his GOP leadership post in the next Congress.

“I believe it is time to step off the leadership ladder and return my focus to crafting public policy solutions for America’s generational challenges,“ wrote in a letter to his fellow House Republicans on Election Night. “With the issues before us today come bipartisan opportunities and partisan differences. My current role obligates me to the latter and too often excludes me from the former,” the 34-year-old congressman added.

In addition to Sen. Barack Obama’s historic win in the White House race, Democrats netted a total of 17 additional seats in the House of Representatives and five new seats in the Senate. CNN has not projected a winner yet in four outstanding Senate races. Should Democrats prevail in all four of those contests, they would have the 60-seat majority that would overcome Republican attempts to filibuster in the Senate.

NEW YORK (CNNMoney.com) - The wear-and-tear of a 22-month campaign may seem like a Caribbean vacation next to what awaits President-elect Barack Obama when he takes over as the 44th president of the United States.

In his first year in office, he will have to tackle the mountain of complex and unprecedented problems facing the country. His agenda will be driven by the need to stabilize the financial system and the pained economy.

Since mid-September, which was the last time CNNMoney.com took a crack at gauging what No. 44's economic to-do list would be, the financial world - and Washington - have been turned on their heads.

[cnn-photo-caption image= http://i2.cdn.turner.com/cnn/2008/images/11/05/art.al.franken.gi.jpg caption="Al Franken is one of several candidates still fighting for a seat this Wednesday morning."]
(CNN) – Several key races are still undecided Wednesday as ballots continue to be counted.

In the Presidential race, North Carolina, Indiana, and Missouri all show Obama and McCain within one percentage point of each other. All three were previously viewed as critical battleground states for both candidates. However, with Obama leading by 175 electoral votes, the 37 votes no longer hold much sway.

Four seats in the Senate have yet to be determined.  As of this morning, Alaska Sen.Ted Stevens was just one percentage point ahead of Democrat Mark Begich and Oregon Senator Gordon Smith had a two point lead on Democrat Jeff Merkley.

In Minnesota Sen. Norm Coleman was 570 votes ahead of Democrat Al Franken.  This tight margin falls within Minnesota's recount law, and a recount is now scheduled to take place from mid-November through early December.

Georgia Senator Saxby Chambliss had a four point lead over democrat Jim Martin.  Although Georgia’s incumbent leads by four points, state law dictates that in order to win the seat, a candidate must attain over 50 percent of the vote. If this does not happen, an automatic runoff will be held between the top two contenders in early December.

With the Democrats currently holding 56 seats in Senate, these four states will determine whether or not the Democrats reach their goal of a filibuster-proof Senate majority. 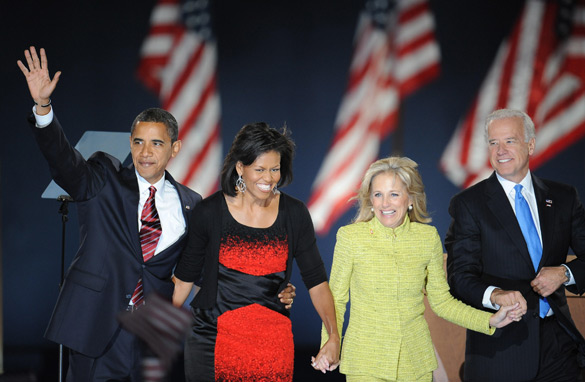 (CNN) - Barack Obama will likely begin assembling his administration almost immediately, and cannot afford the so-called honeymoon some president-elects have enjoyed in the past, CNN analysts say.

With the nation's economy in continued turmoil, and an electorate that is overwhelmingly calling for change, the president-elect will have little time to rest over the next 2 1/2 months before he is officially sworn in.

"This is something that the Obama campaign is working on now for many months," CNN Senior Political Analyst Gloria Borger said. "Obama himself got very involved in this after the Democratic convention, I'm told."

Likely to take immediate priority is the naming of a White House chief of staff, who will help shepherd the transition. Potential names tossed around for that post include the former Clinton aide and Illinois Rep. Rahm Emanuel and former Senate Majority Leader Tom Daschle.

Obama will also move quickly to put in place an economic security team, and has already held high-profile meetings with several economic advisers.

"I think people are encouraged by the kinds of people he's had around him and the names circulating for Treasury," CNN Senior Political Analyst David Gergen said.

One such name is Tim Geithner, the 47-year-old chairman of the New York Federal Reserve. Other names being discussed include former Treasury Secretary Larry Summers and Paul Volker, the former Fed Chairman under Jimmy Carter and Ronald Reagan.

Obama will also want to communicate immediately that he is ready to assume the duties of commander-in-chief, and avoid initial mistakes Bill Clinton made during his transition process.

"He doesn't want to appear like he's not ready for prime time," CNN's Roland Martin said. "A lot of criticisms of Clinton was that he had too many young people around him who weren't experienced in Washington. Obama, who's extremely methodical, very deliberate, wants to bring it across, "I am an absolute leader, I am in charge."

[cnn-photo-caption image= http://i2.cdn.turner.com/cnn/2008/images/11/05/art.prop8.gi.jpg caption="Prop 8 supporters gather at a rally."]
(CNN) - The outcome of an effort to ban gay marriage in California remained unclear early Wednesday since not all the votes had been counted.

Proposition Eight, which would eliminate the right of same-sex couples to marry in California, had the support of 52 percent of voters at 2:45 a.m. (5:45 a.m. ET), with 84 percent of precincts reporting.

In California, voters weighed a gay marriage ban after the California Supreme Court ruled this year that such marriages were legal under the state's constitution.