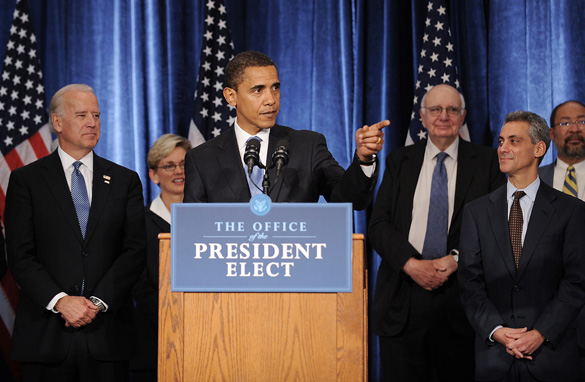 CHICAGO, Illinois (CNN)– For President-elect Barack Obama, there are four transitions going on at once.

If you listened closely, you could hear each of them touched upon at his press conference here as the week ended.

The first transition is the traditional one– the changeover from an old administration to a new one.

“Now, the United States has only one government and one president at a time,” Obama said to the gathered reporters. “And until January 20th of next year, that government is the current administration. I have spoken to President Bush. . . .”

But it is the other three transitions– the ones specific to Obama– that carry the most potential fascination.

There is the transition from Obama, the candidate whom the world had gotten to know during the campaign, to Obama, the man who will be president of the United States.

The same human being fills both roles. But there is– there has to be– at least the slightest tonal difference.

His Nancy Reagan/séance comment at the news conference is the example everyone is talking about this weekend. Had Obama the candidate said the same words, those words might have floated into the air and quickly evaporated. But when the 44th president of the United States says them. . . Well. You saw.

Yet there were less dramatic, but equally telling, instances of this. As Obama began the news conference, he said:

“This morning we woke up to more sobering news about the state of our economy.”

It was the “we” that made the difference.

The “we”– had he spoken the same sentence a week earlier– might have been construed as referring to his campaign, or his supporters. A week ago, he spoke only for them.

But at his first news conference as president-elect, the “we” implicitly referred to the United States of America. Even before Inauguration Day, Obama is speaking for the nation. For every day of his presidency, the word “we” will be all-inclusive.

The next transition is the one Americans themselves will undergo, as they gradually make the adjustment to who Obama now is.

As recently as the beginning of 2004, if Obama wanted to speak to reporters, he was more than willing to go visit them, individually. Here are some names that help explain the change since then:

They may not sound familiar to you, but as the 2004 Illinois Democratic primary campaign for the U.S.
Senate nomination played out, those were the other six men and women who were in the field with Obama. And Obama was by no means the best known of them.

So the very sight and feel of Friday's internationally televised formal press conference was a reminder of just how much has been altered, and how quickly.

Then there is the transition that Obama, and Chicago, will be going through. The city is taking great pride in the fact that, for the first time in its history, one of its citizens has been elected president.

But the inevitable separation has already begun. Obama has lived in a number of places during his life, and Chicago is only one of them. He will soon enough be from here, but not of here. He's leaving– for how long, no one can be certain.

You could hear a hint of this as he called upon a Chicago newspaperman at the press conference.

“Give a local, hometown guy a little bit of time,” Obama said in selecting the reporter to ask a question.

At the very least, Chicago will soon be accepting the idea that Obama has departed on a very long business trip.

“I'm confident that a new president can have an enormous impact,” Obama said during the news conference. “That's why I ran for president.”

The running is over now. That part of his life, for now, is finished.

Both he, and we, are on our way to somewhere else. It's a transitional time.