[cnn-photo-caption image= http://i2.cdn.turner.com/cnn/2008/POLITICS/11/05/palin.campaign.anatomy/art.palin.afp.gi.jpg caption="Palin told Alaska reporters the Republican ticket could not overcome the headwinds."](CNN) - Sarah Palin told local reporters in Alaska that unhappiness with the Bush administration’s Iraq war policy and spending record were responsible for the GOP ticket’s defeat this year.

“I think the Republican ticket represented too much of the status quo, too much of what had gone on in these last eight years, that Americans were kind of shaking their heads like going, wait a minute, how did we run up a $10 trillion debt in a Republican administration?” Palin told the Anchorage Daily News and Alaska’s KTUU Channel 2.

“How have there been blunders with war strategy under a Republican administration? If we're talking change, we want to get far away from what it was that the present administration represented and that is to a great degree what the Republican Party at the time had been representing. So people desiring change I think went as far from the administration that is presently seated as they could. It's amazing that we did as well as we did.”

Palin returned to Alaska last week amid growing speculation about her political future. The Alaska governor is slated to attend the Republican Governors Association’s meeting in Miami this week.

[cnn-photo-caption image=http://i2.cdn.turner.com/cnn/2008/images/11/09/art.jarrett.afp.gi.jpg caption="Valerie Jarrett is one of Barack Obama's closest advisers."]
(CNN) - Two Democratic sources close to President-elect Barack Obama tell CNN that top adviser Valerie Jarrett will not be appointed to replace him in the U.S. Senate.

"While he (Obama) thinks she would be a good senator, he wants her in the White House," one top Obama advisor told CNN Monday.

Over the weekend, Democratic sources had told CNN as well as Chicago television station WLS-TV that Jarrett was Obama's choice to fill his Senate seat.

Jarrett, a Chicago attorney and one of Obama’s closest advisers, is a leader of the president-elect’s transition team.

END_OF_DOCUMENT_TOKEN_TO_BE_REPLACED

Coleman camp declares victory again, but race is far from over

MINNEAPOLIS, Minnesota (CNN) - For the second time in a week, Republican incumbent Sen. Norm Coleman's camp is labeling him the winner in Minnesota's far-from-over Senate race.

Coleman leads Democratic challenger Al Franken by just 206 votes as the first round of tallying comes to a close Monday evening.

"Sen. Coleman remains the winner in this election despite unexplained discrepancies in reporting ...that have virtually all benefited the Franken campaign," Coleman spokesman Tom Erickson said in a statement.

That result means little at this point: Minnesota law mandates a recount when the margin of victory in a race is less than .5 percent.

END_OF_DOCUMENT_TOKEN_TO_BE_REPLACED

Bush and Obama held a private meeting in the Oval Office, while the first lady gave the incoming first lady a tour of the residence.

The president and president-elect walked together along the colonnade by the Rose Garden before entering the Oval Office together. They briefly waved to reporters along the way.

Obama and Bush were not expected to speak on camera following their meeting.

An aide to Obama said they were "going to let the pictures speak for themselves."

The two met in the Oval Office for just over an hour. When President George H.W. Bush hosted President-elect Bill Clinton after the 1992 election, the two talked for nearly two hours.

Monday's meeting was a historic formality, but it was also a time for serious talks. It marked the first time that Obama has visited the Oval Office.

U.S. District Judge Henry Kennedy rejected a Bush administration request to throw out a suit by Citizens for Responsibility and Ethics in Washington (CREW) and the National Security Archive. The government had argued the courts do not have the authority to require the White House to try to retrieve the e-mails in question.

CREW and the National Security Archive are trying to force White House officials to order the attorney general to initiate action to restore the deleted e-mails before they become irrecoverable.

END_OF_DOCUMENT_TOKEN_TO_BE_REPLACED

“President-elect Barack Obama and Mrs. Michelle Obama were very warmly welcomed today at the White House by President George Bush and First Lady Laura Bush. Upon arriving, President-elect Obama and President Bush proceeded to the Oval Office, where they had a productive and friendly meeting that lasted for over an hour. They had a broad discussion about the importance of working together throughout the transition of government in light of the nation’s many critical economic and security challenges. President-elect Obama thanked President Bush for his commitment to a smooth transition, and for his and First Lady Laura Bush’s gracious hospitality in welcoming the Obama’s to the White House."

END_OF_DOCUMENT_TOKEN_TO_BE_REPLACED 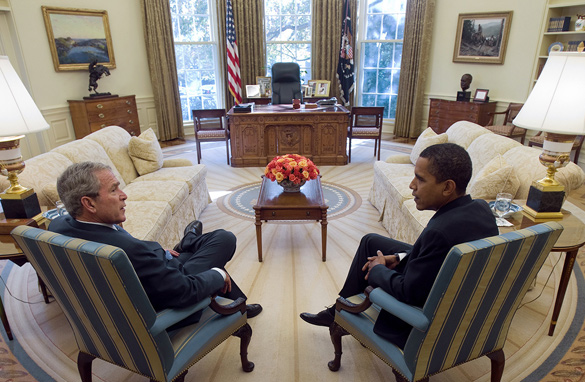 Watch: The public's mood is grim

"The challenge Obama faces has never been greater. No president has ever come to office during a time when the public's mood has been this low. In the 34 years that this question has been asked, the number who say things are going well has never fallen below 20 percent," said CNN Polling Director Keating Holland.

So far, Obama seems to be meeting the public's high expectations. Two-thirds of all Americans have a positive view of what Barack Obama has done since he was elected president and three-quarters think that Obama will do a good job as president.

END_OF_DOCUMENT_TOKEN_TO_BE_REPLACED

Barack Obama won the White House last week on a message of “change.” That’s something that’s easier said than done in Washington.

But the president-elect’s transition chief John Podesta told “Fox News Sunday” that Obama plans to use his executive powers to make an immediate impact when he takes office in January.

Former Clinton adviser to make run for governor in VA

Terry McAuliffe was widely expected to make his decision after Election Day. The former Democratic National Committee chairman will now do a 60 day listening tour of the state.

In September, McAuliffe hired longtime Virginia political consultant Mo Elleithee to start planning a possible statewide campaign, should he decide to run. Elleithee spent the last year working alongside McAuliffe in the Clinton campaign as a senior spokesman, but in recent years he has also helped steer Tim Kaine and Mark Warner to signature Democratic victories in Virginia.

Should he run, McAuliffe will face off in next year’s Democratic primary against state Sen. Creigh Deeds and State House Rep. Brian Moran. Virginia’s Attorney General Bob McDonnell is expected to run for the Republican nomination unopposed.