McCain: Palin will play a 'big role' in the future 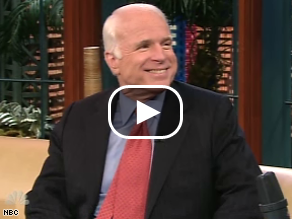 (CNN) - Sen. John McCain said Tuesday he "couldn't be happier" with Alaska Gov. Sarah Palin, despite polls suggesting she was a drag on the Republican ticket.

In his first television interview since the election, the Arizona senator said he was proud to have had Palin as his presidential running mate and grateful that she agreed to run.

"She inspired people. She still does. And look, I'm - I couldn't be happier with Sarah Palin. And she's going back to be a great governor, and I think she will play a big role in the future of this country," he told Jay Leno on The Tonight Show.

A CNN/Opinion Research Corporation survey released the weekend before the election indicated that Palin's unfavorable ratings had doubled since McCain picked her, and 57 percent of Americans believed she didn't have the personal qualities a president needed.

As for the future, the poll indicated that only four in 10 voters would support Palin if she chooses to run for president in 2012. Among Republicans, however, 77 percent said they would support a Palin candidacy in four years.

McCain said Tuesday night that his party "has a lot of work to do," and he predicted that new leaders like Palin would help carry the party into the future.

"I really believe that Sarah Palin is amongst some, like Tim Pawlenty and Bobby Jindal, the governor of Louisiana, there's a group of young Republican governors and - mainly governors, but also some in the Senate - that I think are the next generation of leadership of our party," he said.

Asked if he'd be up for another presidential run, the 72-year-old senator seemed doubtful.

"I wouldn't think so, my friend," he said. "It's been a great experience, and, you know, we're going to have another generation of leaders come along, and I'll hope that I can continue to contribute."

This was McCain's 14th appearance on "The Tonight Show." The former Navy aviator's appearance was scheduled to coincide with Veterans Day.

Today Alaska Governor Palin sits down for a one on one interview with CNN's Wolf Blitzer. The interview will appear on the Situation Room starting at 4pm ET. Palin will also appear tonight on Larry King Live at 9 p.m. ET.