Obama and McCain set to meet in Chicago 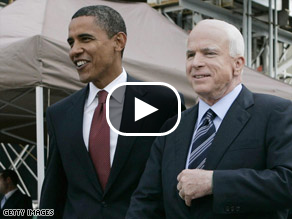 WASHINGTON (CNN) - Call it a meeting of the bipartisan minds.

The meeting will take place at the Obama transition headquarters.

"It's well-known that they share an important belief that Americans want and deserve a more effective and efficient government, and will discuss ways to work together to make that a reality," Obama transition spokesman Nick Shapiro said in a statement Sunday.