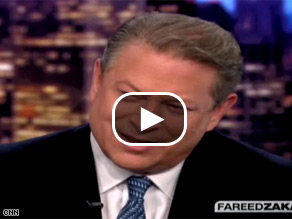 (CNN)—Former Vice President Al Gore was fired up over the election of Sen. Barack Obama in one of his first post-election interviews.

“I can barely contain my excitement about this election,” Gore told CNN’s Fareed Zakaria. “Regardless of the differences over issues and politics this was a water shed election that really just gave every American a feeling of great pride in our nation’s ability to transcend our past, and redeem the revolutionary promise of our Declaration of Independence: that every human being is created equal, and it’s electrifying seeing that declaration.”

Despite the Republican’s loss, Gore also said he saw many of them express a sense of pride on election night.

Be sure to catch the full interview on Fareed Zakaria’s GPS, Sunday at 1 p.m. E.T on CNN.