Greene: Obama, Chicago, and the eyes of the world 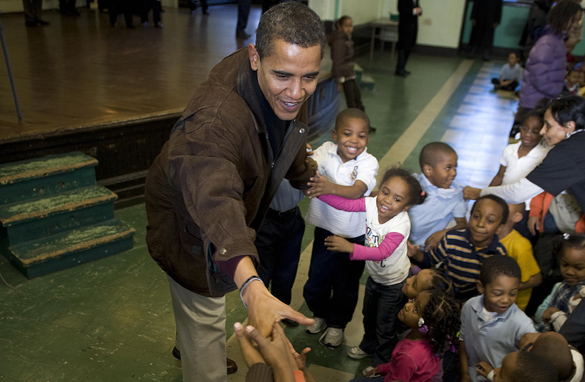 CHICAGO, Illinois (CNN)- For all the words that President-elect Barack Obama has spoken at news conferences here during the last several days, there are two specific words uttered by Obama this month that will resonate in town longer than any of the others.

Most of his recent words– appointments of White House advisers and staff members, discussions of his potential cabinet, analyses of the economy– have been, of necessity, on the dry and formal side.

Yet the two unforgettable words, at least in the ears of people who live around here, were spoken by Obama earlier in November. They were a combination of words that no winning presidential candidate in the history of the nation had used to greet his supporters on an Election Night.

You won't find the words in the prepared text of Obama's Election Night speech. They weren't included.

They were added by Obama himself at the last moment, and they were the first words he said in public as president-elect.

Check the tape– you'll find it:

And– Chicago being Chicago, a city that, over the generations, has learned not to trust any piece of happy news– the immediate and involuntary instinct, upon hearing those words, could be summed up in another brief phrase:

The “Chicago” part, no one was doubting. Obama is a citizen of Chicago, he was standing in a park in downtown Chicago, the counting of the ballots had made it official: he was the first Chicagoan to be elected president of the United States.

So if the “Chicago” in “Hello, Chicago!” was taken on faith, then the word to be examined and looked upon with skepticism was the other word:

Did it really mean “goodbye”? People who live in Chicago have a way of assuming that if something seems too good to be true, it probably is, and so the thought began to occur, in the minds of some, that if someone from Chicago becomes president, that may mean that soon enough he'll decide not to be from Chicago anymore.

Part of this is inevitable and a product of logistics– the president lives in the District of Columbia, not the County of Cook– but other parts of it have long precedent in the annals of Chicago's fickle relationship with hometown men and women of achievement. We'll get into some of that after the Thanksgiving holiday.

For today, though, the built-in ambivalence about Chicagoans who attain something that seems too grand to be fully absorbable can be illustrated by the comments of two people who were born here, and who we met as they walked together near where we have parked the bus during these transition months.

[cnn-photo-caption image= http://i2.cdn.turner.com/cnn/2008/images/11/26/clays.jpg caption="Kim and Mike Clay think that now that Chicago has a president of the United States, the world may start to think of it differently."]

Kim Clay said that, for her whole life, wherever in the world she has gone, people have associated Chicago with three things:

She said that now that Chicago has a president of the United States, the world may start to think of it differently.

But then– this was built into her Chicago genes– she added another word:

“Unless Obama screws up,” she said.

It's always there– that eternal Chicago impulse to presume, even on the loveliest and sunniest day, that a two-thousand-pound safe is about to drop out of the sky and onto your head.

Her husband said that, in his experience, people around the country and around the world have a lasting picture of Chicago:

“The White Sox, the Cubs, and corruption.”

With President-elect Obama, whom he considers “a regular guy from the city,” he said the opportunity exists to give the town a completely revised stereotype– one that is victorious and transcendent and new.

“Unless some of the people in Obama's administration bring corruption in with them,” he said.

He and his wife shrugged at each other.

In Chicago, no day is so pretty that you can't imagine a freezing blizzard forming just over the horizon. And December– there's no getting around it– arrives next week.