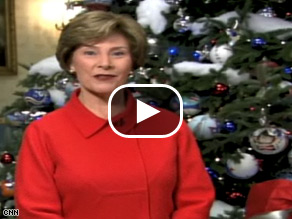 (CNN) – It’s a red, white, and blue Christmas this year in the White House.

In a CNN interview with Kiran Chetry, the first lady discussed how the Bush family is welcoming the Obama women as they transition to Washington. Laura met with Michelle Obama in November to discuss the challenges of bringing up a family in the White House, but declined to give the future first lady specific advice on adjusting to live in the country’s most famous home.

When asked about the role of the first lady, Bush responded, “All of our first ladies have brought their own expertise, their own interests to the White House, and our country has benefited because of that and I’m sure that’s what she’ll do as well.”

The first lady also opened up about her service to the plight of women in Burma and how she plans to continue her work after her husband’s administration.

“The President’s going to build a freedom institute with his presidential library and so it will be a really good vehicle for me as well to continue to talk about Burma, to meet with dissidents from Burma like the young Buddhist monk that I had the chance to meet with when we were in New York earlier this fall. So that will be a really good vehicle for me to be able to work both with women of Afghanistan, as well to make sure that the freedoms that they’ve won so far will continue. I know that everyone, as they look around the world at Afghanistan sends the women there their very best and we want them to be able to succeed.”