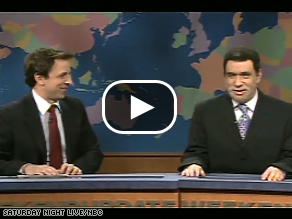 CNN's Alina Cho reports Gov. Paterson is unhappy with how SNL portrayed him.

SNL, famous for mocking politicians and newsmakers, portrayed the governor in a four-minute "Weekend Update" segment as confused and disoriented - often looking in the wrong direction and mistakenly walking in front of the camera when it was not his turn to speak.

SNL's version of the governor, played by cast member Fred Armisen, also refers to using cocaine and says he became governor of New York due to a "sex scandal I was miraculously not at the center of.”

A spokesman for Paterson, who became governor of New York last spring after then-Gov Eliot Spitzer was forced to resign amid a sex scandal, suggested the skit was offensive to all people with physical disabilities.

"The governor engages in humor all the time, and he can certainly take a joke,” said Risa Heller, Paterson's communications director. “However, this particular Saturday Night Live skit unfortunately chose to ridicule people with physical disabilities and imply that disabled people are incapable of having jobs with serious responsibilities.

“The governor is sure that ‘Saturday Night Live’ with all of its talent can find a way to be funny without being offensive,” she also said.

Paterson has said he is completely blind in his left eye and has limited vision in his right eye. He is the first legally blind man to be governor.